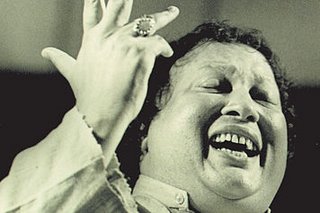 A couple weeks ago, I picked up the 5-disc set of Nusrat FatehAli Khan's Paris Concerts from 1985 & 1988 on Ocora. Amazing, amazing music. I wrote a little bit the other day for Bagatellen here. One thing I touched on is something that's always...bothered me when listening to songs sung in a language I don't understand, that is, how easy it is to ignore content, to isolate one aspect of a work from others.

In painting, you can look at, say, Raphael's 'Transfiguration' or Velazquez' 'Crucifixion' and pretty much ignore the explicitly Christian content, instead concentrating on the underlying human essence. One needn't believe in the myth of Jesus' resurrection to read the Raphael as an evocation of transcendence over earthly travails, a triumph of human spirit. Christianity, unfortunately, is imbued in most of our daily existence, so it's something that needs to be dealt with. We (I think) have less difficulty ignoring the ostensible reality of Athena or Mercury when admiring Greek sculpture, whereas there's a certain amount of conscious effort required to extricate one's judgment from scenes purporting the reality of the religion one happens to have been in the midst of during one's life. There's that necessary caveat to be expressed: "Of course, I don't think any of these things depicted actually occurred, but..." It's a tough hurdle for many people, I've found. They can't separate out the overt text from the subtext, always seeing the looming face of Christianity (or Islam, or Hinduism or Judaism, etc.) tingeing, if not outright discoloring everything else.

This carries over to music as well. I have this problem, to some extent, with religious classical music; if I never hear "The Messiah" again, it'll be too soon. But even there, I can disentangle the mythological trappings in given examples, say, the "enfant Jesus" section of Messiaen's Quartet for the End of Time. It's an inconsistent thing.

In standard pop music, much the same thing applies albeit (usually) without the religious content. Pop lyrics, obviously I should think, are by and large vapid, boring, banal, stupid, etc. It's real difficult, for me, to ignore them and concentrate on either the underlying music or, less often, the "spirit" behind the moronic lyrics. However....I can happily listen to some pop music where the song is in a language I don't understand. I've no particular reason to think that the lyrics in a Toure Kunda song are any less stupid than those in one by Snoop Dog or Dave Matthews. But since I can't translate them, I don't care!

But how valid is this stance? If I understood Senegalese, my appreciation of Toure Kunda's music would, I assume, drop a bit. By wilfully ignoring this shortcoming, by not going out and finding translations for the lyrics (I imagine thy're available), I'm not knowing the music as fully as I could in the fairly certain knowledge that, were I to do so, my enjoyment would be lessened. I admit to feeling somewhat dishonest when pursuing this tack.

So, the late Mr Khan. Aside (I think) from the Rowe/Nakamura disc, "between" (Erstwhile), this set is the most beautiful music I've heard this year. The majority of it (perhaps all of it) is Islamic religious song sung in...Urdu? (I'm not sure) I don't countenance Islam any more than I do Christianity and were Khan singing in English about the glories of Jesus instead of in Urdu about those of Allah, I can't help but think that, incredible music aside, I'd've been at least somewhat put off. Who knows, maybe not. I can listen to some Gospel without retching...But this stuff is so gorgeous, so rapturous, so full of life that I blithely cast off those other concerns. He might be singing about subservience to Allah, but I don't care. The essence that comes through, the core beneath all the fol de rol, is humanist and beautiful, just like it is in Raphael, Velazquez and Messiaen.
Posted by Brian Olewnick at 10/17/2006 09:20:00 AM