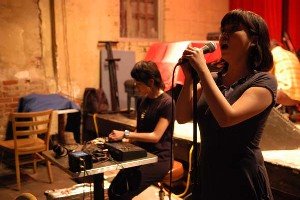 The first three sets on Saturday were my favorite combined "moment" of the festival. Each was pretty quiet but each approached quietude from entirely different angles.

The Mattin/Radu Malfatti disc released earlier this year on formed is a big recent favorite of mine (see review here) and I was anticipating something along similar lines which, indeed, transpired. The piece was more "composed" than I had thought, the duration of the elements plotted out to the second, Malfatti positioning a digital clock next to the small score. It began with a few minutes of silence before Malfatti picked up his horn. As on the recording, the trombonist's contribution consisted of soft, long tones, recognizably brass-derived but burred. Mattin, on laptop, played sounds that sometimes coincided, sometimes overlapped, sometimes were out on their own. These sounds, it soon became clear, were derived from recordings of the ambient sound in the room played back a few minutes later. You began to listen for the odd cough or chair squeak to recur. But that was all secondary to the gentle pace that began to assert itself, a breathing kind of tempo, very slow like some large sleeping creature. At least twice, silences of upwards of three minutes were maintained. I was held rapt throughout, a beautiful set. David Jones made some interesting points later on--the audience had kept as quiet as possible during the set. But once you, as an audience member, realized that whatever sounds you happend to make were being utilized by Mattin as part of the performance, didn't that free you to be as "noisy" (or at least, normally active) as you wished? I'm guessing Mattin wouldn't have minded that at all; not sure about Malfatti.

Burkhard Stangl & Kai Fagaschinski actually began in less tonal territory than I'd anticipated, the former taking a violin bow to a small object held on his knee underneath his hand (a piece of wood?) while Kai demonstrated a ridiculous command of his instrument, taking it through breath tones, key clicks, gorgeous pure notes and more. It stayed fairly abstract for a goodly while, Kai holding his forearm under the mic, blowing transversely across his arm hairs, rubbing the clarinet reed over his beard stubble, etc. At one point, rather humorously considering Cosmos was to follow, he made mouth noises of the pinched and squeezed variety, sucking air through teeth pressed to lips. It was a rather comic sound, made more so by Stangl's choice of delicate, prettily strummed acoustic chords behind it. Gradually, the improv began to coalesce into more and more concrete form, naturally not forced, until it ended with an absolutely lovely melodic section, a simple and effective "song" to cap the performance. Very beautiful, very gutsy in this context. Fagaschinski, I get the feeling, has a fine stubbornness that won't allow him to simply bend to fashion. I'll be following his future work as closely as possible.

I somehow think of Cosmos as a fragile affair, something that in a given performance, has a greater chance of failure than success. This is baseless, actually, as their Erstwhile album ("Tears") and their track on the AMPLIFY box, the only times I've previously heard them I think, are both outstanding. Once again my fears were rendered groundless as they turned in a thrilling, gossamer and steel set. Admittedly, Sachiko can virtually do no wrong in my ears but Ami's work outside of Cosmos has been far spottier. Here, however, she was right on point, modulating her high-pitched squawks beautifully as well as doing some relatively "normal", lower-pitched work. There's a certain beguilingly theatric aspect as well, Yoshida, her mic set at a level several inches above her mouth, adopting a kind of pleading position later offset when she turned her face to her left, burying her mouth in her upper arm. Wonderful set. My only minor issue is that, when singing for longer stretches, she tends to fall into a pattern that you often hear with, say, free jazz saxophonists where there phrases last for a set duration that has to do with the breathing capacity. This "super-rhythm", once perceived, can be grating. Ami sometimes fell into that, her screeches lasting for about 7 seconds, one after another. Small carp, though.

GOD. Sorry, but it's difficult to get past the name. Aside from their having been a not entirely capitalized God band in the mid 90s (Mick Harris? Justin Broadrick? not sure of the members right now) and even if it's an acronym, it's just kind of silly. I'd've preferred DOG. They're pretty big favorites of much of the crowd, this electronics duo (Bryan Eubanks & Leif Sundstrom), but I've yet to be convinced. For a while, it was an OK noise exchange then, somewhat astonishingly, Eubanks resuscitated those pure rising tones that were so irritable from two nights prior. Sometimes, it's true, they seemed to arise in tangential pairs and their intermingling fields provided a bit of interest, but it just went on and on, long after everyone had grasped what structure there was. I jokingly said to a few friends afterward that it may have been a tribute to the recently deceased James Tenney, whose "For Ann Rising" used quasi-similar, ever-ascending tones. Varying reports surfaced that this might actually have been the case though the last ones I read denied it.

I don't know Wolf Eyes, despite Braxton's endorsement. I may be missing something but I've yet to feel impelled to sample them having, maybe, a reasonable idea of what I'd get, that being something not so different of the No Fun approach I've already written about. Aaron Dilloway is an ex-Eye and he capped off this evening with the festival's only solo performance. He looked pretty cool, admittedly, what with dual mics inserted in mouth, their wires trailing out each side, causing him to appear like nothing so much as a plaid-shirted catfish. He generated a fairly strong wall of noise, augmented by processed vocalizations, swaying in place captivated by his own creationbut also using way too much goofy sounding echo-effects. I thought, "eh." If I can over-generalize, one of my problems with this area of music is that, on the one hand, there seems to be very little thought involved but on the other, there's not the out and out abandon you might otherwise wish to see. It's often stuck in the middle, wanting to be outrageous but not really pushing it (I think Mattin gets there, Joe Colley too) but not having a lot of seriously interesting ideas. Given some sound-generating equipment, too often it's a boy's night out affair, seeing how loud and abrasive one can get which doesn't strike me as all that far from seeing how many beers one can down and just about as worthwhile. The audience demanded an encore (there was more than a whiff of a rock performance ambience) and I liked it much more than the main set but, damn, give me Cosmos' depth any day.
Posted by Brian Olewnick at 10/04/2006 09:02:00 AM