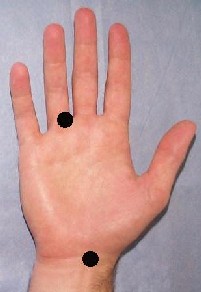 So, I'm sitting at my desk Friday afternoon around 3PM, glance down at my right hand and see, on the underside of my wrist just below the ball of my thumb, a chickpea-sized lump under the skin. "What the...?" I exclaim. Immediately I race through a bunch of rather humorous conjectures. Was this always there? No, I think I would've noticed it before. Is there an equivalent lump on my left wrist? Nope. Hmmm....It's pretty hard and initially seems like it might be a growth on the tip of my ulna. Or radius. Whichever bone ends there. But further prodding reveals that its hardness is more of a cartilage type than bone--there's a little give. It's seems capable of being moved a wee bit. It doesn't hurt at all though the more I poke it, it seems likely I could make it sore, so I try not to.

Well, when in doubt, google. So I type in, "bump on wrist" into the staunch search engine and, fairly quickly come to realize that it's a ganglion cyst. Kewl. Such growths are non-cancerous and not otherwise malignant. In some people, they are painful and can be easily excised. For others, they disappear after a while or just hang out there in perpetuity. The most common site is on the back of the wrist but, as the illustration shows, my area and the base of the ring finger are also frequent. There's no danger of a small, Alien type creature erupting. This thing appeared so suddenly that I have the strong feeling that, had I been looking in that direction at the right moment, I could likely have seen it flower.

For me, the main thing I've gotten out of this is a reminder, as though I needed it, that the body is just a sack o' stuff that has its own schedule of gradual decomposition and weirdness. If this extrusion is the worst thing that happens to my shell in the next 20 years, I'll be pretty lucky. It's just strange to suddenly acquire a new physical characteristic after 52 years. Plus, until a matching one appears on my left wrist, my sense of symmetry is thrown off.

Olivia Block - Heave To (a wonderful new release on Sedimental. I should write something on her, one of my favorite current musicians)

Loy Fankbonner - La Pebellon (I think I'm remembering the title correctly--"The Pavilion" in Espanol. An intriguing disc made of of processed sounds recorded through the artist's window)