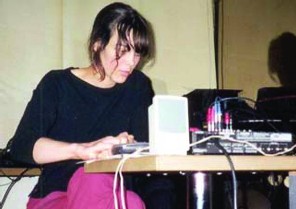 It's long been something of a paradox: I listen to a teeny tiny fraction of the music available out there in the world, some miniscule sliver of the market, but that slice grows and grows becoming all but unmanageable. There might be only about 5000 people worldwide really into contemporary "eai", but most of them seem to put out discs (the rest of us write about it).

A necessary outcome of all this product is that much of it is, relatively speaking, mediocre. That is to say, I'd still rather listen to your average, humdrum eai track than My Chemical Romance (don't get me started), but things do have a tendency to blend into one another. Even musicians who I have a seriously high amount of esteem for, say Gunter Muller, get into the habit of releasing things that become real difficult to differentiate from prior recordings or, essentially, from any number of current offerings from others.

So, I end up placing more and more value on the music of those musicians whose individuality remains striking, whose creations sound like something that could only have originated with them. (I'm not sure, by the way, if this is an entirely justifiable outlook, but I'm old-fashioned that way). Rowe would be one, of course. Samartzis, who I wrote a little bit about is another; happily there are plenty more. One, most definitely, is Olivia Block. I first heard her several years ago, getting her initial two releases, "Pure Gaze" and "Mobius Fuse" (see my AMG reviews, the urls of which aren't being accepted here--maybe too long) at the same time. Many people use field recordings but only a handful, like Block and Toshiya Tsunoda, consistently apply such a poetic ear for sound. Even more than the usual query, "How do you tell what's 'good' and 'bad' in this music?", discerning "good" and "bad" field recordings might be a fool's errand but, presumably for subjective reasons, there are some that simply leap out at you in their incisiveness, concentration of detail, poetic character, juxtaposition within a mix, sheer gorgeousity of sound, etc. Block is not only unerring in her choices of raw material, she has the added...fearlessness to inject and overlay music that is unabashedly nostalgic in nature, harkening back to neighborhood brass bands playing in the gazebo. There's a beautiful, rural feel to the music--one can easily imagine lying in a field, listening to the wind rustle through the weeds, faraway fireworks, echoes of the music from a half-mile away. Dunno, maybe it helps if one grew up in a quasi-similar environment (I believe Block is originally from Texas, now residing in Chicago), open enough to allow the isolation of elements to be perceived, peaceful but active. In any case, both recordings are unique, wonderful discs, well worth checking out (presumably both still available from sedimental).

Last year's "Change Ringing" on Cut, made it three for three, another wonderful recording with a larger contingent of live instrumentalists (see a multitude of reviews at the Cut site, here). This month, Ms, Block is back on Sedimental with the bracing and superb (and superbly titled) "Heave To". I've only listened a handful of times, including blasting it in the car downtown NYC last Saturday night, but I feel safe in saying it's a helluva piece of music. The first several minutes of the opening track are as exciting as anything I've heard in the last few years and, if the remainder doesn't quite stay at that ridiculously high level, it's not all that far behind. The over-riding impression I have is of being in the belly of an old wooden ship, the vessel itself traversing a heavily flotsam'd sea, the detritus banging off its hull, echoing through its innards. The park band elements aren't entirely absent, chords emerging like the foghorns of passing tankers, then receding. There's also a lot of insane Pendereckian string playing. I'll have more to say about the disc when I write it up for Bags but, do yourselves a favor and pick this baby up.
Posted by Brian Olewnick at 10/26/2006 09:28:00 AM

I've enjoyed Block too, and can't wait for Heave To to land in my hands, shouldn't be long.

Do you have the Block/Seth Nehil duo disc from Sedimental back in 2003? Quite different, overall quiter but still well worth hearing.

Its probably still available, no idea, let me know if you want me to sort you out with a burn!

Oliva Block is playing solo at the LMC Festival just before christams, looking forward to that one.

Hey Richard. Yeah, I have the disc with Nehil--real nice.

She's doing an installation at the Diapason Gallery in February (did you visit that place while you were here?) which I'm really looking forward to.

No, it was on the list of potential places to visit but I never got there unfortunately.