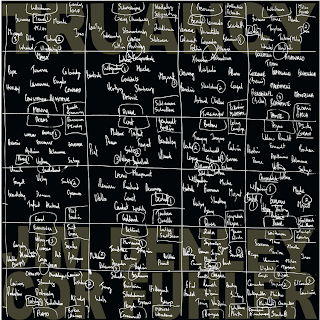 The cover image, scrawled by Denley, shows a configuration of artists from many ages and genres, arrayed in a gridlike pattern presumably trying to establish some kind of connection, or perhaps simply a set of influences. It's intriguing, though I can't discern any effect on the music herein, which is excellent in any case. It's "simply" Fuhler on piano (with preparations) and Denley on alto saxophone (again, with preparations) but sounds far more vast and intricate. While my preferential tendency is decidedly more toward the sparer, post-AMM notion of improvisation and while I've recently heard much music on disc that was, for me, over-cluttered and rushed, it's always interesting to hear work that, while certainly informed of that more considered area, chooses to fill the space, be quite active and succeed very well in this endeavor. The two tracks here are fine examples, Fuhler and Denley molding an elastic, tensile space where something is almost always occurring, usually three or four things, where "placement" or necessity seems less of a concern than maintaining a certain thrust and textural variation. Denley's alto, always a problematic notion given my personal prejudices, doesn't shy away from its fundamental properties even as its palette is greatly enhanced via his preparations. Hard to quantify, except to acknowledge the instrumentalist's inherent musicality, why it works so well here and is, again for me, rare elsewhere. Fuhler, not surprisingly, spends more time inside the piano (though standard notes percolate through every so often) and, one presumes, is also responsible for some radio work and other electronics, all of which handled with his customary deftness and depth (I miss hearing more of his work since his transference to Australia). The music never gets frenetic, more going from medium to a nice, grainy, rough-edged, slow flow, the latter always full and grimy, with that wonderful sense of air circulating around the sounds.

An excellent recording, don't miss it.