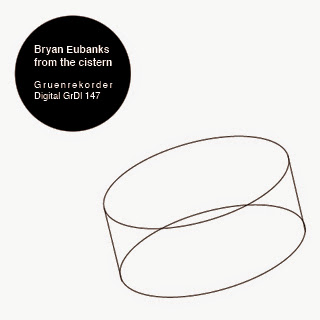 Bryan Eubanks - From the Cistern (Gruenrekorder)

I'm not sure if I've ever been inside a real cistern (unless the old, circular Issue Project Room space counts as one), but I've always had the notion that they're amazing things. The one discovered by Eubanks in Washington state seems to be especially interesting. A squat, underground cylinder, 14 feet in height and with a diameter of some 200 feet, it also features a 45-second delay and an array of columns every 12 feet that offer a "variety of diffraction, refraction, and reflection phenomena".

This download only release finds Eubanks conducting three long explorations of that space. "Pulse" consists of sine tones (tuned to the "1788th partial of the fundamental"--I've no idea what this means) sent out into the subterranean void, reverberating and resonating for almost a half hour. Perhaps it's due to one's knowledge of the situation, but there's a wonderful sense of darkness achieved, of the pulses assuming the character of light blips disintegrating into the far reaches of the cistern. It's extra haunting when you hear an airplane passing overhead, the thrum of its engines seemingly amplified below ground. The equipment used in "Five Tuned Tubes" (played with a tenor mouthpiece) produces very different sounds, naturally enough, Eubanks setting them out in discreet, low-pitched batches with silence between. Each is tuned to a different partial, resulting in overtones that, like the sines, curl into the depths of the cistern, gradually absorbed. Inevitably, one misses the reality of being in situ but as is, it remains a fine, deep experience. "Sine Series" (for James Tenney) lasts upwards of 78 minutes and uses four overlapping sets of sine tones (partials involved, once again). Here, the sounds are round and organ-like, cottony layers threading through one another, Eubanks using a tonality that might remind one of slowed down Terry Riley (or a hyper-slow alap). On this piece, it's more difficult to discern the effects of the vault, the tones filling the space rather than snaking through it. But it's gorgeous, abuzz with rich, undulating pulsations, splintering into subtly dissonant shards at points, coalescing into new harmonics subsequently. I could listen for another 78 minutes, easily. The textural depth is really something to hear--so is this recording.