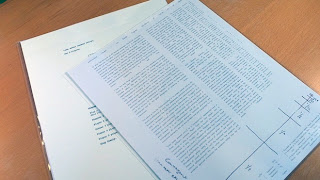 Sarah Hughes - accidents of matter or of space (Suppedaneum)

The first release on this promising new label (which etymology I just researched to find that it's the name of the foot support for a crucified person) arrives affixed to a sheet of heavy paper some 12 x 14 inches, scoffing at my compartments for oversized disc packages. It's put to good use, however, with a side given over to the score of the work and another sheet harboring a fine essay by Dominic Lash, presented in a form that mirrors the structure of the musical work (both in vertical columns and in the spacing of words horizontally, if I'm not mistaken) or, more accurately, three of the four tracks here. The first piece, "Criggion" is a recording of Hughes improvising on zither in the transmission station in the Welsh village of the same name. It's fantastic, an absolutely gorgeous integration of instrument and soundscape, dark rumbles, distant, hollow bangs, penetrated by slender, resonant string plucks. Really, one of the finer examples in this area I've heard in a long time.

The three realizations of (can never exceed unity) are tougher goes, but very rewarding, performed by Rhodri Davies (harp), Neil Davidson (guitar), Jane Dickson (piano), Patrick Farmer (electronics) and Dmitra Lazaridou-Chatzigoga (zither). The score is a kind of meditation on Zeno's paradox, wherein one instrument plays "a continuous tone or sound" for the length of the piece and the others, entering in turn (? I think), play freely but each for a total of half the time of the previous person. SO if the composition lasts 20 minutes, one plays continuously, the second creates ten minutes of sound (spaced freely, I believe), the third, five, the fourth two and a half and the fifth, one minute, fifteen seconds. I may have this wrong!! As they can place the sounds where they will, this results in some silences, or near silences (which would seem to be the case if that first person was playing very quietly. I find I tend to disregard the structure and just listen. The pieces are spare, the sounds often barely glimmering here, roughly buzzing there, with an appealing sense of random overlap. They're oddly knotty, the silences sounding very much "set off", somehow, without the smoothness one, for some reason, expects. This is a good thing. A beautiful recording. 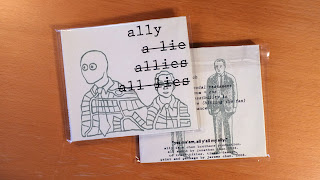 Hitherto unknown in these parts, the Chen brother are, well, brothers, hailing from upstate NY who approached this project in a rather unusual manner. One, Jeremy, created the visual design and determined the number of tracks as well as their titles and durations. Jonathan then put together the sounds to conform to these strictures. In this instance, Jeremy's apparent penchant for brevity (seven cuts, 18 minutes total) seems to match with his sibling's obsession with feedback, as all of the pieces howl, vibrate and screech with such. The general sonic area isn't really my cuppa, granted, but it's one of those sets that I think might work fine in situ, where one could be swathed and/or battered by the assault, something that tends to flatten out on disc. The abandon is there, the depth not so much. Noise fans may well disagree. 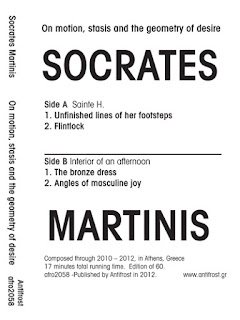 Socrates Martinis - On motion, stasis and the geometry of desire (antifrost)

A short (17 min.) cassette release containing four fairly impenetrable tracks apparently made up of field recordings, rough enough ones that you could almost mistake them for cracked circuit electronics. On "Unfinished lines of her footsteps", they appear in succession, a different recording occupying several seconds, then ceding way to another, not worlds apart, always urban (I think), gravel-colored. "Flintlock" seems to be similarly constructed though the sources vary more, have a wider tonal and dynamic range; it still sounds more or less industrial but includes gentler areas, like a lovely pseudo-flute episode with vibrating metal in the background at the track's conclusion. Side B of the cassette, "The bronze dress", things continue apace, bell sounds appearing but through a static haze. The last track tends a bit more toward the smoky and soft, but never losing that rough edge entirely. This particular method might pall over a longer stretch or series of recordings, but at this brief length, it's perfectly delectable.