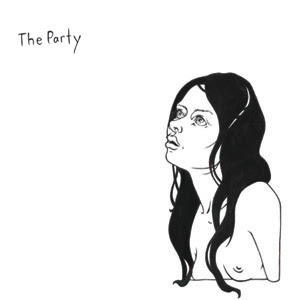 That phenomenon of the basically good, solid improv performance edging, just briefly, into something more. Here we have two performances, or portions of same, each lasting about 16 minutes, by Allport (percussion), Clément (analog synth) and Narayan (autoharp), in Toronto and Montreal in 2010. The first piece begins with a drone, a very rich one, soon interrupted by various bangs and clicks, either Allport I suppose, or the others moving about; I tend to enjoy when musicians don't worry about ancillary noise they create simply by adjusting, putting down or otherwise doing "normal" things with items within their reach. It unspools into a quiet rumination, soft moans with scrapes and squeaks before recollecting into a Crypt-ish whirlpool in its last few minutes. There's nothing that particularly stands out, to these ears, but at the same time it satisfies. Sometimes I mentally shrug and say, "OK, fine.", other times I think that, especially were I in the room, I'd be quite well sated, leave the space feeling enhanced.

The disc is designed so that the second track seems to pick up where the first ended, in very AMM-like terrain. They get to a really nice, dry sound, all sand and arid whistling, zero humidity sliding and rubbing. But int he last several minutes, they glide into what, on the surface, doesn't seem to be exceptional: a low moaning drone with the odd deeper tone, augmented by an autoharp strum here, a thin, reedy tone there but also a sudden sense of the space, those random taps emerging, possibly some sounds from the room's exterior, footsteps, a voice, a squeaking door. It blooms into something greater, unexpectedly. I love it, feel transported to the place and time. Well worth the journey. 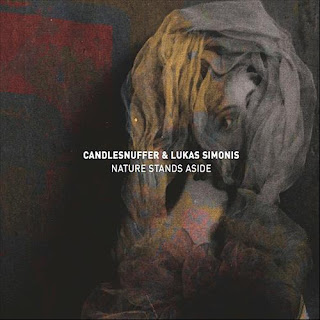 In some ways, I have a similar issue with this release from David Brown (Candlesnuffer), here paired with Lukas Simonis, recorded in 2007-08in Rotterdam. Here, the basic approach is not so conducive to my taste: guitar and electronics, tending toward the frenetically active. kind of efi meets magnetic tape. So I listen for things that draw me in, that get past what I often hear as surface effects. It takes a while. Brown is very guitar-y, often using bell-like tones and a striking approach that summons up sounds not so different from parts of "classic" Rowe, but with emerging and disappearing rhythmic patterns. Simonis is more abstract, fairly thick slabs with vaguely metallic feel slice into the pieces or bracket Brown's sounds. Still, there's much I find peripheral for a good bit, some feedback with plucking that feels perfunctory. It's not until the seventh of eight tracks, a harsh, sparer piece, that things open up for me, that some sense of space pervades the music, that theres a feeling of necessity. Maybe it's the relative reticence, maybe the obscure allusions (at least in my mind) to gamelan, not sure, but it springs into much more vibrant relief for me. The last track, making use of some looped lounge-jazzy samples also works, not by reaching into more difficult territory as did the prior, but by allowing playfulness into the mix and by keeping thisng brief.

All in all, a mixed bag. SOme will find the guitar/electronics interaction bracing on its own terms. Others, like myself, will have to negotiate the grounds, locating those nuggets that satisfy our peculiar tastes. Those nuggets do exist however. 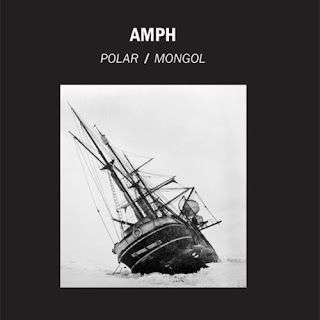 Andreas Malm and Peter Henning (AMPH), out of Malmo, have issued this very attractive 12", 45rpm recording containing two tracks of controlled noise. "Polar" indeed summons up frozen, nautical images, with foggy horns, whistling windlike tones and imagined ice being crushed beneath prow. A swirling mass of air, stone and icy water, the piece builds and builds, the storm surging; the music becomes quite loud, extremely dense and ultimately, necessarily, deflates, gutters out with what sounds like muffled grunts. It may be not so different from many a thing heard before, but the duo handle their business quite well, creating thick, satisfying slab of noise. "Mongol" is both more regular, in that looped rhythms are employed, and rougher, more fragmented insofar as the disparate set of sounds utilized. It chugs as well, galumphing forward like some large, shaggy beast, groaning, complaining, clearing out vines in its path. As before, matters grow noisier, more metallic, the creature entering some hellish factory perhaps. As is often the case, I found myself imagining experiencing this work in a room, amidst multiple speakers; there's more than a tinge of Xenakis in play. As is, it's a good effort, worth checking out.