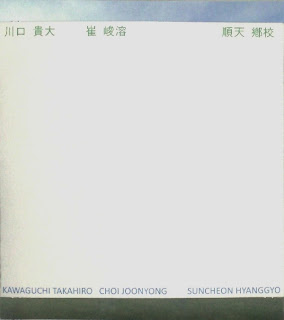 I'm given to understand that "The Suncheon Hyanggyo [a temple/Confucian school] was constructed in 1407 (7th year of Joseon’s King Taejong) and was moved several times before finally arriving in Suncheon in 1801 (1st year of King Sunjo)". Kawaguchi and Choi conducted an event there in August, 2011. There was news coverage of the occasion and it's well worth watching the video to get a better idea of what occurred than can be gleaned from the recording. What's striking to me is the balance between and art event and a kind of elaboration on "ordinariness" that eventuates. The calm, accepting manner that the duo maintains throughout, constructing loose agglomerations of material, not all of which have to do with sound, is as much a part of the performance as anything else. A metronome is a consistent presence, though not always heard; other sounds include air blown through a long pipe, plastic bags inflated via small motor, little fanlike gizmos (a la Rowe) beating against the metal of a large pile of folding chairs that was the central object, or at least the largest one, passing planes.

As ever, the vast difference between being present at the event (a handful of bemused visitors sat politely and seemed, guessing at their post-happening reactions caught in the newscast, to have more or less enjoyed it) and listening to the audio capture at home raises questions. Had I not seen the video, I'm sure I would have more or less enjoyed the disc but would have had a stronger than usual sense of missing something. It's less concentrated than much of the work from the Seoul crew, clear to see why after viewing the video. Once seen, that relaxedness, the idea of equivalency between empty and full(er) space takes precedence in my mind, and I find myself deriving great enjoyment.