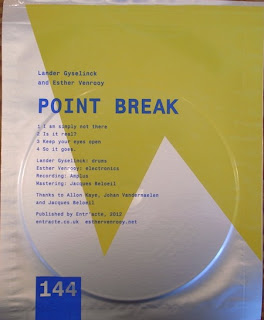 This disc required a bit of coming to terms with. Initially, I was a bit put off by the juxtaposition of drums and interpolated dialogue (from film sources) on two of the four pieces. Gyselinck's drums are quite, um, drummy, though the more I listened the more I felt a connection between his work and some of the more interesting, if relatively unheralded Euro free percussionists like Gunter Sommer. But a big, if very personal, breakthrough was when, with the help of Google, I discovered that the source of the first bit of text was Hal Hartley's film, "Trust" and that one of the speaker was Adrienne Shelly. I had happened to meet Shelly a couple of time sin the early 90s when she appeared in some theatrical work by my friend Richard Harland Smith and found her to be quite and impressive and lovely person. A bit over six years ago, she was horribly murdered in her Manhattan apartment. Hearing her voice in a context like this was startling (I don't know by any means whether or not Venrooy, who I take it was responsible for the sample, is aware of Shelly's history). In any case, this refocused my attention (along with a subsequent extract from "American Psycho"), somehow allowing me to hear the drums and electronics in a different light.

The first track is all about ringing bell tones (possibly Tibetan bells, struck with a soft mallet), the vibrations allowed to suspend for several sections, I think entwined with subtle electronics from the start, although I'm not positive, but eventually segueing into a low, quavering drone; very attractive. "Is it real?", the track with the "Trust" extract, bubbles up with popping, foaming percussion before the conversation enters, as well as some cracked electronics. Its added layer of resonance for me (or anyone who knew Shelly) provides enough spark to lift it out of the ordinary though I'm not sure if it would otherwise, the basic contrasting of the text and percussion being a bit obvious. Similarly with "Keep your eyes open", where the psychotic babbling is to an extent mimicked in the rhythms of the drums (and some electronics) and brings to mind, unfortunately, some of those 80s David Moss pieces. "So it goes", the final track, returns to pure sound, flutelike tones abutting rubbed surfaces, rhythmic pops over soft drones, subsiding to a lovely burble prior to some drum explosions, forwards and backwards, that punctuate the work, ending with a small storm of harsher electronics. Simple but effective.

A mixed bag overall, for this listener, but the better portions bear hearing. 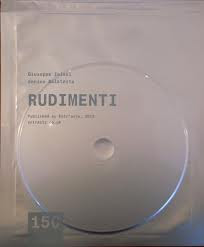 A similarly oriented duo here, though with quite different results, Ielasi deploying electric motors an field recordings, Malatesta manning the percussion, in a single 26-minute track. The motors are tiny and necessarily remind one of Taku Unami's work form a few years back, producing a gentle, skittering sound, mechanically rhythmic but soft. Malatesta interacts on the same low level, sliding between the motors, injecting a good variety of rhythms and pitches. The field recordings, to the extent I can pick them up, are kept low in the mix, tingeing the simmering clatter (as ever, I have a tough time distinguishing between water droplets and fire crackle!). The work is segmented (it was put together from a couple of sessions); toward the end there's an upsurge in both volume and density, a small climax if you will, followed by a really lovely coda of sorts, a dry, slowly surging pulse against those possible drops, really very beautiful. On the whole, a very intriguing piece, alternately absorbing and ignorable (not a bad thing) and rather different from other music I've heard from Ielasi in recent years. 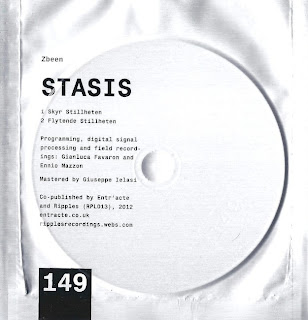 Zbeen being a project from electronicists Gianluca Favaron and Ennio Mazzon. The first of the two cuts, "Skyr Stillheten" covers fairly common territory in its 32 minutes: an undulating, tonal drone-like pattern is laid done, beguiling and comely, over which all manner of small life forms creep, like the environs of a warm pond, scuttling, flitting and swimming about. Part of me senses an easy gambit--what could go wrong?--but I gave the pair credit for extending it at some length. It's quite easy to lose oneself in; whether or not there's any lasting nutrition supplied is another story. "Flytende Stillheten" is substantially the same, the activity sparser (nighttime on the pond, perhaps). Again, the duration actually helps the piece establish itself though, as before, it goes down a bit too easily, pleasant but forgettable. 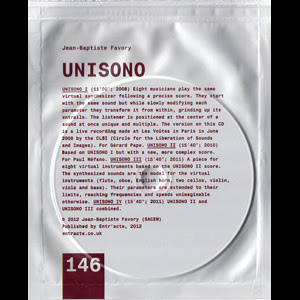 Interesting idea here, in four stages. First, eight musicians, playing virtual synths, play the same initial score but individually modify certain functions, allowing the piece to splay out in unpredictable directions. The same thing is done in the second piece, with a more complicated score. The third uses the same score as the second, substituting virtual instruments (flute, oboe, English horn, two celli, violin, viola, bass) wherein the parameter shifts enable these "instruments" to far outstrip anything that could be achieved with them in "reality". Lastly, pieces two and three are simply combined.

All well and good, but how gripping is the music produced? Well, making allowance for the necessity of hearing it on stereo as opposed to in situ (where one can easily imagine, at the least, an immersive effect), I don't get so much from it. "Unisono I" quickly gets to a point somewhere between whistling wind and distant air raid sirens, oddly soothing and, again, likely more effective with the sounds aswirl about you but a bit flat here. The second version is indeed more complex and more interesting as well, though some of that complexity is at the cost of introducing very "synthy" sounds, bloops and bleeps, that I have a bit of trouble digesting. Still, it possesses a kind of nervous urgency that's very compelling, courtesy of some shuddering sounds and needling tones. It's fascinating how the introduction of synthesized instruments (which, by and large, do sound very much like their acoustic counterparts) ratchets up the interest level though they're more or less performing the same music. But the colors are much richer, the long, shifting lines much more variegated, really solidifying the work quite beautifully. The combined version reincorporates the pure synth sounds and is fuller thereby, very good, but I prefer the more pared down variation with only the pseudo chamber ensemble.

can't wait until most of this pretentious music becomes;'not your cuppa':-)