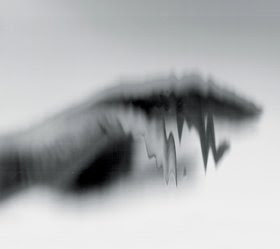 Contrary to the effects of the titular condition, which I'm given to understand afflicts both musicians, and as also implied in the images of distorted and pained hands adorning the cover, there's some seriously steady and decisive music contained herein. It's understandable, for a moment, that the innocent listener might have an idea that this is more Panzner's affair than Stuart's if, like yours truly, one's knowledge of the latter's work is pretty much covered by his adventures in Wandelweiserland but I have no doubt this is an entirely mistaken impression. Percussive elements are discernible (Stuart sleeve-credited with "friction, electricity, gravity), pure or transmogrified. But the who-did-what aspect is even sillier to dwell on than usual as what one confronts are these enormous, extraordinarily deep slabs of sound, layered as far in as one can hear. If there's a visual analogy that springs to mind it's of a multitude of thin sheets--a wide range of colors, grains, embedded elements, degrees of transparency and opaqueness--overlaid with a fine combination of care and abandon.

There's more than enough depth in play so as to yield new stuff on each listen. "organ b/w timpani solo" is essentially a gradual surge, though the components have a life of there own, beginning with what seems to be a room recording with shuffling feet and hands, sawing (or heavy breathing), bubbling this, zapping that, so many crossing lines, each a very distinguishable color. "Churning" was a word that often came to mind. Great combination of up-close and distance, scrims of sound, causing you to strain to hear what's "beyond". After ten minutes or so, this high, writhing tone enters (the organ?), forming a formidable, constantly shifting substrate for layer after layer of sound, the volume steadily increasing. It's like a massive blender where, no matter what's chucked in, the strands remain clear. Just huge sound, but so clear. It reaches its orgasm (hard to avoid the metaphor), having barely avoided annihilating your speakers, and sputters out, directly into "dissection puzzle", which both ratchets matters down half a notch and also explores a very different soundfield; I get the sensation of harsh jets of water being sprayed at great force against plastic or metal with a good amount of resonance. It's as intensely active as the prior cut but with more air pumped through, even if it's at skin-stinging speed. Again, additional sounds accrue with no sacrifice of clarity--a really fine scouring. It dissipates briefly, then receives a few strenuous blasts of static that coalesce into the blowtorch that begins the final cut, "casa de pedras". This is the eeliest, toughest to grasp cut for me, but I love it. The structure seems steady-state at times but there's a ton of movement occurring throughout, a kind of lateral shifting, though also circular, like on the surface of a pond, refracting the view beneath in dozens of ways. It's gentler than the other two pieces, but more beautifully confusing.

A tremendously exciting recording and a very auspicious debut for the Erst imprint, AEU.

ALL THANKS TO DR WILLIAMS FOR THE GREAT DEED HE HAVE DONE FOR MY DAUGHTER?
My daughter suffered from dystonia for more than 7 years which we started experiencing in her when she turned 4 year and 5 months we all thought it will end but got even worse as days went by. We tried all several treatments and therapy prescribed by various doctors we met but to no avail, she lost total concentration and always complain of  neck discomfort. She usually tells me she haves jerky head movements. This were steady disorder that disrupted her entire life, even at night she slept less because of this.It was during a casual conversation with a friend that i learned about Dr Williams herbal medicine I was able to contact him on his email address. and give him all the necessary information that he needed,few day later he sent me the herbal portion and his medicine was able to restore her back to normal and she is very okay now without any side effects whatsoever. If you have dystonia, do not hesitate to contact him on drwilliams098675@gmail.com for advice and for his product. I hope this also helps someone out there.