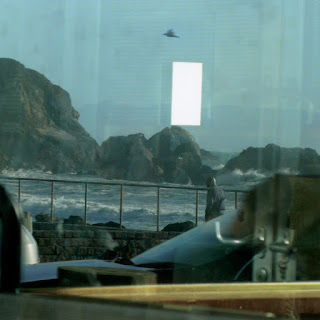 Cazan is a California-based composer who has studied with, among others, Michael Pisaro, Mark Trayle and Morton Subotnik. This fascinating and highly enjoyable vinyl release contains two works. "Swallow", for six strings, metal and feedback spends half its time in what might be described as a "standard" extended bowing foray, a rich, slightly stringent sound field wherein one might imagine a half-dozen Eddie Prevosts at play. But somewhere along the line, it subtly, almost imperceptibly expands into something larger. The clattering metal, like cans buffeted by the wind, which I think was always there, assumes a bit more prominence, the ringing tones splay out into a complex web, a slow throb makes its presence felt. Happily, it doesn't "climax", but continues to splinter out, receding but widening as it does so, ending in a disturbing (wonderful) series of soft beeps that sound like warning alarms, evoking a strong sense of longing in this listener. A piece that ends up having far more emotional impact than you would have imagined at its inception.

"In Rooms Bodies" is a piece, as far as I can concern, for field recordings and sine tones, reminiscent in a sense of Pisaro's "Transparent City" series, though the sounds are more urban, conversational, etc. (the bodies in rooms, one suspects) but with a similar, silvery tone wending it's way through. Scenes shift rather abruptly though and the music intensifies and diverges, hisses and harsh groans entering. It doesn't get out of hand but instead seethes for quite a while with something of a Lescalleet feel.

Two strong pieces; this is my first exposure to Cazan's work and I'm anxious for more. 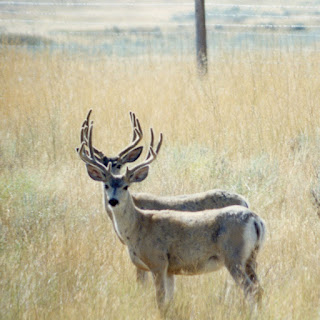 Subtitled, "First/Dew The Hikuioto Selection 2012", Side A contains six tracks, Side B, one. The Japanese aspect is readily apparent with taped voices manipulated and woven with hums within a dark, malevolent atmosphere. A disembodied and authoritarian metro voice warns to "Mind the gap", the train leaves, the sound cuts in and out, a Japanese female voices offers advice more officiously, sounds whir, disturbingly dreamlike. A comforting, minimalist electric keyboard figure slithers through every so often. Things buzz, grind, beep. Voices emerge and disappear. An interesting suite, these sic pieces, unnerving enough.

Side B, "Music for Cicadas (Cut)", pretty much lives up to its title, sounding like a looped corruption of the Ramayana Monkey Chant with many other layers worked in. If the actual sound is a bit off from the cicadas I've experienced, the incessancy is on the mark. The music becomes absorbing (though I'd guess many would find it maximally irritating) and there's the added grace note of a lovely song fragment which appears just at the end.

Care Of Editions
My understanding is that these releases are limited to 118 copies and 45 downloads, after which they disappear.... 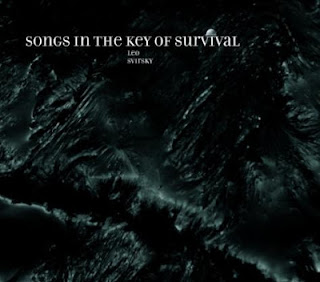 Leo Svirsky - Songs in the Key of Survival (Ehse)

It's not the easiest of paths, to construct political songs in a contemporary classical vein, though I have more sympathy with prior attempts than many reading this, I imagine, tending to enjoy Cardew and Rzewski when in that vein at least, with regard to the former, when he pulls up short of "Smash the Social Contract!" as a refrain. Svirsky's set of songs is marginally closer to Rzewski, I'd say, if only because he's also clearly a virtuoso pianist and the structures and technique owe more to avant classical history than workers' songs. Svirsky sings as well, however, in a reedy voice that recalls another political musician, Robert Wyatt. He also eschews the catchy melodies of The People United.. or the North American Ballads, opting for gentler, often lovely ones that perhaps recall the Feldman of "Only". "Profound Boredom and Rage" for instance, my favorite piece here maybe, has that delicacy. It also, oddly, reminds me of the quieter work of Gastr del Sol circa Upgrade & Afterlife (more Grubbs than O'Rourke, I think). Between and amongst these songs are flurries of pianistics, tending toward clouds and clusters, surging; this might be where the Rzewski attack shows, though Svirsky lacks the iron fingers and more than compensates with touch and grace. The songs glimmer and usually resist easy grasp though, standing back, several are quite songful, just slightly ethereal.

It's a very enjoyable recording, ably achieving its goal of political art-song, no mean feat, and offering a complicated, unique voice besides. Check it out.