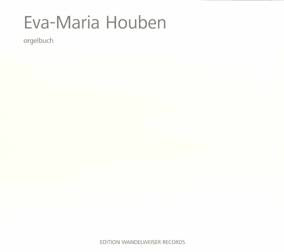 There's something about Houben's music. It's so pared down yet so moving, so endlessly fascinating that I feel I could spend days and weeks listening. I'm hesitant to bring up Agnes Martin once again, but the aspects of certain kinds of regularity, the endless wealth of stuff dwelling in apparently vacant areas, the tonal range; well, it's difficult not to.

In, "orgelbuch" Houben has limited herself to three sets of fourteen combination of manual and pedal stops (2/1, 3/2 and 4/3) and chosen a third of those for this release (6, 4, 4). the tones are only several seconds long for the most part, maybe one to four, but act like shifting, tinted planes, calmly passing across each others face, altering colors and positions slightly. The notes tend toward the breathy, but are also flute-like and, often enough, what we normally think of an organ sounding like. The pieces are fairly short as well, between about four and seven minutes. Within this sparse territory, there exists ample room for drama (Ozu comes to mind) as when, at the beginning of "trio VIII b" or during "quatuor I b", the deep bass note enters bearing all the portent of a Bach fantasia but, of course, leading to an entirely different, more contemplative area. The clearly perceived calm here is very striking.

There is something at hand of, simply, the inquisitive search, seeing just what will happen when this stop is laid alongside that one, or those two. In this sense, I feel a kinship with Lucier, though Houben never even approaches the slightly "science experiment" cast that can sometimes be the case with his work. Houben always maintains a strong emotive content, sublimated though it may be which elevates her music beyond the merely experimental. Combined with rigor and just a wonderful sensibility of tonal color, it makes this music endlessly absorbing and quite timeless. 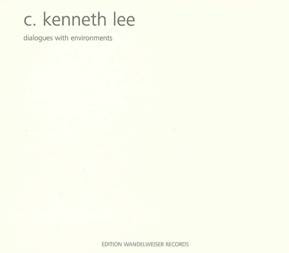 Three works for solo piano in a kind of homage to Cage's "4'33"", insofar as the room in which the recordings took place is accorded coequal prominence, at least as the stated intention of Lee. So one hears various rustles, coughs and whatnot while the beginning of the last track, "Piano Solo No. 5" (2011) sounds as though recorded in close proximity to a number of aging fluorescent bulbs. More to the point, the piano sound is noticeably different in the three spaces.

The music itself doesn't seem to owe all that much to Cage, at least directly. Had I listened not knowing the source, I might have guessed Tom Johnson. Some of the music has a similar ungainly minimalist aspect, clusters more or less repeating but slightly off and rarely very smooth. Then again, there's attractive tonal, semi-melodic work as well, though not of the Cagean Sonatas and Interludes variety. In these sections, I think a little more of Hobbs or the more acerbic music of Skempton. As has been my experience with some of Johnson's music, I often find the idea more interesting than the results. Here, the music doesn't quite stand out for these ears, though I get the feeling that, were I attending the live show and in tune with the room vibe, it might have been just fine. 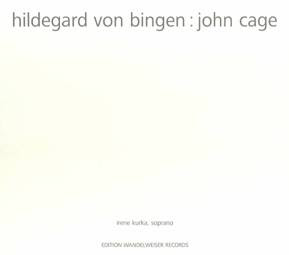 I admit to being woefully ignorant about all things von Bingen. I managed to miss the bandwagon (late 80s?) when her work was making a resurgence among new music types. Since then I've heard the odd piece on radio or elsewhere, but I couldn't reasonably make any assessment of Irene Kurka's performance here except to say that it sounds pure, committed and non-anachronistic to me. The salient matter here, of course, is that it's paired with Cage's "Sonnekus 2", for solo voice. Nine von Bingen compositions are presented first, then "Sonnekus 2", also in nine sections. I wasn't familiar with this work of Cage's either. The texts are derived from Mosaic sources (arranged so that the word, "Sonneries" appears acrostically). Kurka sings them in a style that clearly echoes von Bingen; I'm not sure how much, if any, freedom the performer has here. There's a video available on You Tube with Susanne Hille singing it in almost this manner; perhaps there was a direct reference on Cage's part?

After each is presented separately, they're heard again, intertwined, one von Bingen, one Cage, all nine songs from each (I assume the same performances). You get a nice can of flutter effect; the tones are quite similar but with differing tinges between each. Kurka's soprano is pure and very rich, balancing the ethereal and the earthly. Connecting Cage to medieval music--nice idea, very well handled here in an unusual and worthwhile recording.