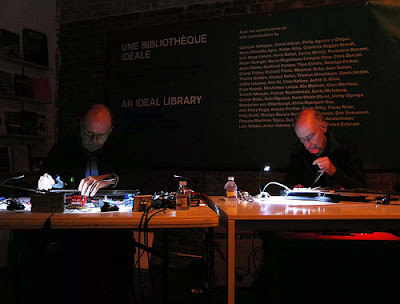 One of the many amazing and, if not unique, damn rare things about Keith Rowe is his way of looking at an event or series of events in a wider context, usually several wider contexts. I recall when he played at Tonic with Christian Fennesz (2004?). The set order was to be Rowe solo, Christian solo then the pair. Spending the day with Fennesz, Rowe was aware of his intense excitement about the upcoming evening and surmised that his, Fennesz', set would be loud, surging, onrushing. So, with the view of all three sets and their "exterior" structure, he fashioned his own set very much as a prologue, keeping things subdued with a gradually rising ramp, if you will, to lead into Christian's set and to provide a platform of sorts from which he could launch. Which he did.

Knowing that he was to play four sets in two nights, three in duo and finally solo, he had several areas of concern. One, expressed to some of us, was to make sure he had four different approaches, four relatively discreet areas of sound. But on the whole I had the impression of two pairs, similar but offset from each other, like stairs:

wherein the first set of each evening was the subtler, softer and more graceful of the two and the second the more visceral, confrontational one. Moreover, almost as a linkage, day two's first set culd fit between day one's two performances and the finale, the solo, extended the second set from the first evening, giving a 1-3-2-4 retrospective nesting.

But perhaps that's just me...Rowe certainly looked at the sets as four portions of a larger work.

I'm not sure if this was Michael Pisaro's first live improvised set though I imagine it's been at least since his AACM-inspired days as a guitarist from Chicago. The day before, the pair had agreed on one parameter, at Pisaro's suggestion, that the set be 49 minutes long (Michael likes that number). Both of Tuesday's sets were difficult to anticipate for different reasons. Pisaro's playing on his own pieces and, from what I've heard, on those by others had always resided in a relatively small, if nuanced pool: quiet, full of ebow induced hums, sometimes gentle taps, very rounded. And, augmented by some soft sine tones and at least one noticeable patch of field recording (birds and car engines predominant) that's pretty much the area in which he chose to dwell, Rowe also remaining fairly quiet but much rougher, utilizing his stalwart scrub pad to good effect. It was quite subtle, bearing (I'm sure) more layers and connections than could be heard at first blush; I'd very much like to hear it multiple times. As is, I found it both relaxing and moderately absorbing. If anything, Rowe was leaning a bit toward Pisaro's territory and, given that, my favorite moments were toward the end when, instead of reciprocating in kind, Pisaro chose to lean a little bit the other way, playing a handful of two, three and four note melodic phrases, implying a song form--lovely and unexpected.

As was the case with the first set, Rowe/Lambkin was also a first meeting though you might not have known it from the way they came prepared. Both, independently, had chosen to bring drawing and other art materials to the show, amplifying them quite severely. Sitting side by side at separate tables, they fashioned something of a busily active workshop scene, scribbling, rubbing, tearing, scissoring and taping their way through the construction of a visual art form (which may find its way into the recording they're working on for Erstwhile on the day this is being typed). Rowe turned on a (very good) salsa station for much of the set while Lambkin, having realized it was the birthday of the late Don Van Vliet, at one point flipped on a cassette recording of "Well" from Trout Mask Replica, lovingly swathed in layers of static. It was all very brusque, sometimes close to violent, though the pair went about their business like two craftsmen on adjacent benches, churning out creative industrial product. It was massively entertaining, sight and sound, with a great sense of depth and play, entirely absorbing and perfectly placed. Elegance where you wouldn't expect it.

[Pausing to note that on the first night, about 180 people crammed the Temp Gallery to the brim, maybe 120 the second, each a far healthier turnout than normally achieved in these parts]

Hardly a first meeting, Christian Wolff and Rowe have performed together, in AMM and elsewhere, many a time since 1968, most recently in Philadelphia the preceding Sunday. Here, no piano in the room, Wolff brought his electric guitar, placed flat on the table, with a few objects in tow, notably a small cookie tin. He had also, I think, tied a piece of thick ribbon to one of the guitar strings which he occasionally bowed, indirecting stimulating those strings. The improvisation was quiet but rougher-edged than the previous evening's opener with Pisaro, Wolff, in Rowe's mind, playing more viscerally than he'd heard him before, certainly without much of the quasi-melodic delicacy he showed on Sunday. But he retained the wonderful habit of cutting off a phrase at a very unexpected point, at some precise fraction of the length the listener expected it to dwell. The performance reached a number of brief, one or two minute planes of sublime stasis, then would move calmly on. One of those involved Wolff doing a wonderful double-tap on the aforementioned tin with his bow, string/wood, string/wood, softly, in a regular rhythm, just seven or eight times. Elegant and beautiful.

Finally, Rowe played solo. It was an amazing set, Rowe as brutal as I've ever heard, beginning by grinding his trusty scrub pad into the strings of his Lap-Stick (a kind of lap-steel practice fretboard, analogous to the violin one he'd used previously) with huge pressure, bringing radio sound (mostly a soul station with some great tracks and a Barry White-voiced announcer) in and out in thick, plastic bursts, attacking the strings with the mini-fan, stones, knives, really creating a thick, almost miasmic atmosphere, very rough, bubbling and viscous. Through it all, though, was threaded a 1935 recording of Casals playing a Bach cello partita, so lovely, offering the listener multiple connections to discover between it and the music being created 78 years later. The piece possessed huge physical volume, real three-dimensionality, felt very much like you could stick your arms into it an knead the elements. He ended with a complicated, bitterly beautiful drone, bleak but resolute. Very intense and very much a climax of sorts for the two evenings. I do think that, ideally, one would hear the four sets in sequence, as movements of a single work. If we're lucky, perhaps we will one day...

Would that all festivals could be this solid and inspirational Great stuff.
Posted by Brian Olewnick at 1/20/2013 01:42:00 PM