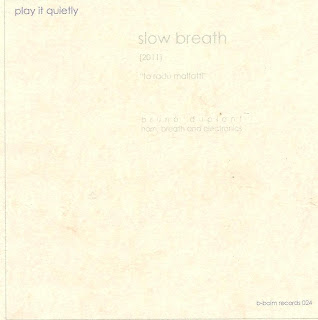 Funny, when I was scrounging around to find a pilferable cover image for this release, I cam upon Richard's write-up, about which I'd forgotten. While I'd been listening to, and enjoying, the disc, it had never crossed my mind that there was anything other than a trombone in play here (with some minor enhancements, perhaps) so when i read his assertions of the core sound having been electronically generated, I immediately began to doubt my ears. Allah knows they've been mistaken often enough, especially in this area where sources can be obscure. In any case, I was heartened to discover they so still occasionally function properly.

Richard gets to much of what's interesting about this release. It's clearly in the Malfatti lineage part from being on his label; I don't thin kit's straying to far afield to consider it at least partially an homage. The question would be: within those quasi-narrow strictures, how does one produce something recognizably one's own? A difficult task but I think Duplant does a fair job at that. The swells are Malfattian on the one hand but deeper and louder than is the elder trombonist's wont. The attacks vary subtly, more softness here and added hint of a growl there. The spacing of the sounds defies easy pattern- recognition; my guess is that it's intuitive with no score or timings but I could easily be wrong. As well the subsidiary sounds, the hollow gravelly rumbles and gentle taps establish a lovely space adjacent to the one carved out by the trombone.

It's wetter than Radu's work and substitutes a certain looseness for the master's precision but, qualitatively, it sits comfortably beside that work and is a thoughtful, clear and sensuous experience. Highly recommended.