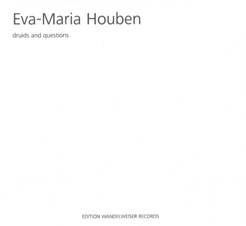 I've been listening to this recording quite often over the past few weeks, including a couple of days (like today) when it's the only thing I'm playing. I absolutely love it though explaining why--why this particular recording works for me so well--is, as usual, a little tough.

One work, an hour long, consisting of "electro-acoustic music with organ sounds". Had only the latter been indicated, I wouldn't have raised an eyebrow as almost all of what one hears sounds as though it could have been generated by adapted organ pipes. The passages, full but soft, embedded in a quieter hiss, are airy and breathy with a tracery of organ-tone within, the kind of sound I imagine could be conjured up by allowing more air to escape a pipe than normal. What other sounds are incorporated i couldn't say though I get a hint of traffic now and then; but that traffic, if it is such, sounds like it could have been organ generated as well.

No matter. The wavelets of sound appear in succession, held for a bit, differently lengthed, interposed with periods of near silence, a form one might more or less expect from Houben, fitting in quite well with the Wandelweiser aesthetic. And yet it stands apart, very beautifully and strongly.

On the left inside of the packet is written, "Listening to Charles Ives, The Unanswered Question", on the right, "Yet a Druidic Difference/Enhances Nature now" - Emily Dickinson. The Ives is a high favorite of mine and, once posited, making a connection between the gently keening tones created by Houben and the searching trumpet in the older piece isn't difficult. Perhaps it's, in part, that quality that's so moving, that blending of calm and subsurface agitation limned in the Houben, the breathing sequence, not regular but also not panicky, and the unease beneath. I can't say I know from druids more than the man on the street and have no notion how they mingle here.

The music has a huge tinge factor, coloring one's room, seemingly fading away but always maintaining a crucial presence that one registers from time to time as things around you suddenly leap into a different focus than before.

I'm curious why on this occasion you don't feel the need for more 'grit' (as you tend to put it), when you have quite often criticised other discs which are similar to your description of the Houben for lacking 'grit'.
I'm not challenging your judgement as I haven't heard this one yet (and am dying to), but just wondered if there was something else along these lines that you could specify or articulate in this case. Or is it just purely subjective whether any particular piece has enough grit?

A fair question, except I don't really find this work fundamentally smooth--there's a lot of grain there in the sense of air patterns and (I take it) incorporated electro-acoustic sounds (not that I can easily distinguish the two here).

But more generally, when I write something like you mentioned, it's simply that I feel that the piece *needs* it, that there's not enough of the street, if you will in it and that something about the music, to me, requires that. Not all music does, of course (though I might guess that, in recent years, I've felt its absence more strongly than I might have 10-20 years ago.)

I think a lot of times that slickness/grit issue is a postproduction one more than it is the actual music.