A cassette release (though I heard it on disc) of highly abstract electronics that bear, at best, only a passing resemblance to the song of the godwit--at least that's the assumption I'm making, though perhaps it's a singularly eai-oriented bird...In any case, it's very good: two tracks, the first being more aggressive and "noisy", beginning with some gentle, metallic pops before they're overwhelmed by harsh, contact-mic-ish scratches, severe whines and more. It never gets too dense--much more reminiscent of Sachiko M than most toiling in this area. Very solid, although things get more godwit-like on the second track, which I find all the more successful. It's really just as active but much quieter, yet within the compressed dynamic range, there's an enormous amount of space and differentiation; an entirely convincing sound-world is created, one that might well refer to the avian, amphibian and insectile life one observes with one's ear to the ground. Lovely. 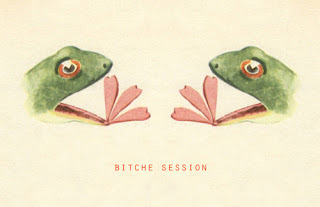 Not bitching as such but, rather, recorded at a place called Bitch in Nantes, this is a cassette recording of pretty uncompromisingly harsh electronics (Johnsen-electronics, saw, Battus-magnetic pick-ups). Also a cassette release, also heard by yours truly on disc, also very noisy but there the comparison with the Vogel ends. It's very active, more percussive than you might guess given the instrumentation, full of squawks and screeches and, ultimately, unsatisfying to me. That blurry, subjective line between interesting and uninteresting noise gets crossed here, for me; I don't pick up as much consideration as I like--perhaps the pair is unconcerned with that or is choosing to operated in a more Mattin-oriented manner. Don't know, but as uncompromising as the music undoubtedly is, it also failed to grip me. Curious to figure out why the difference in personal appeal between this and Godwit Songs. Your mileage may vary. 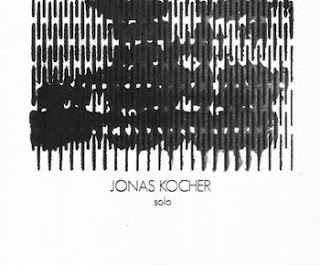 Solo accordion, that is, a form I'm admittedly partial to and Kocher, who I don't think I've previously heard (someone will prove me wrong, no doubt) [and, indeed, Richard, did--sorry about that] delivers admirably. What comes through more than anything else is a deep love of the instrument and the huge variety of sounds of which it's capable. A live set, Kocher is very patient, using a great deal of space, his choice of sounds running much of the gamut from virtually inaudible to full-throated squeeze-boxiana. The set sounds only loosely organized, as though Kocher is taking some delight in discovering the sounds as he happens on them, worrying less about the overall structure which nonetheless coalesces very nicely and naturally. There's an especially beautiful high drone portion about 20 minutes in that I could have happily listened to for a long time. Difficult to describe otherwise; not as extreme as Costa Monteiro on the same instrument but well to the left of Klucevsek et. al. A fine recording--don't let it slip under your radar. 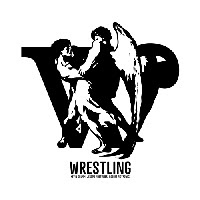 One of two handsomely produced 45s issued by the Polish label Bocian, this one features two excerpts from a 2005 live show by what I guess one could call a power trio. Now, I'm not as big a fan of Drumm as many though I've no doubt this assemblage is quite capable of producing a healthy blast of noise, but they seem not so well served by these brief snippets. Artur Nowak, who recorded the event, mentioned how great the entire show was and it well may have been. Here, we get two parcels of ear-rending sound, mere peepholes into the concert. One can imagine its entirety, I suppose, and the samples are tasty morsels of the kind, but...I guess I have to question the strategy in such a release. It may have been a matter of this or nothing, though, and fans of the three musicians will doubtless consider it worth the expense. It does have its (short) moments. 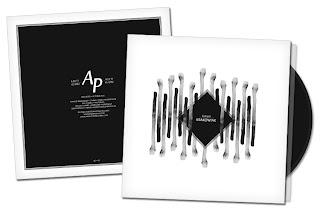 Krakowiak's 45 works far better with regard to this medium and, to these ears, is a stronger set of music. Two pieces lasting 4'59" with Krakowiak on cymbals and microphone. By description, it sounds like nothing unusual: one with stroking of the surface (with the mics? not sure), generating keening overtones and unaccompanied by low-end rumbling from some other source, the other a more delicate version of same, the deeper tones taking on a very poignant quality as though commenting on their higher-pitched neighbors. But the particulars of the pieces are somehow unique and very, very rich. I imagine there are countless rubbed or bowed metal recordings about--this is one of the better ones I've heard. Ok, I admit, I would have liked to have heard this music at greater length, but still.....

Ha! Here comes the disproof :) I made contact w. Jonas Kocher through myspace a couple of years back and was immediately taken by his approach and temprament w. the accordion. Over the years he has, among other things, been leading collab projects with, I think, Balkan and/or South-east European improvisers and experimentalists. Nice to see him getting some well deserved attention!