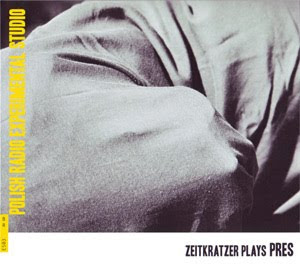 In which our indefatigable avant cover band takes on electro-acoustic works from the 60s and 70s by Polish composers, and wonderfully so. I should say, at the outset, that I'm entirely unfamiliar with the five composers represented here (Eugeniusz Rudnik, Elzbieta Sikora, Krzysztof Knittel, Denis Eberhard and Boihdan Mazurek)--my loss--so I've no idea how close or distant these realizations are frm the originals, but I'm guessing it doesn't matter too much.

It's a live recording and seems to have been done in one shot as there are a few seconds of ambient sound between tracks. Indeed, in his excellent liner notes, Michael Libera mentions this importance of Zeitkratzer member Ralf Meinz (credited with "sound") who apparently greatly augmented the product of this chamber ensemble on the fly, resulting in a true electro-acoustic work, once removed. Group leader Reinhold Friedl was given some thirty hours of music to study and from which to extract pieces to render. Those chosen, assuming the recreations are fairly accurate, tend more toward the minimalist/drone-y than one might expect from music of this area, though he points out that Polish electro-acoustic music had a very different character from German or French of the period.

In any case, the results are delightful, whispery, brushy swathes of sound, flurries of pizzicato on Sikora's "View from the Window" (an amazing sound), the deep, impressive thrums of Knittel's "Low Music" (a highlight here), the super-complex tingly drone of Eberhard's "Icon (for tape)", my other highlight and something I'd very much like to hear in its original form.

A fine recording, my favorite work yet from Zeitkratzer. 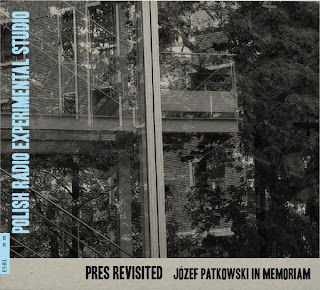 An interesting notion: Disc 1 contains seven works by four Polish composers, more or less in the electro-acoustic area while Disc 2 consists of live interpretations of each piece (plus a group improvisation) performed at Cafe Oto in London by (in part or whole) Phil Durrant (violin), Mikołaj Pałosz (cello), Eddie Prevost (percussion), Maciej Sledziecki (electric guitar) and John Tilbury (piano). The set is dedicated to Józef Patkowski (1929-2005), who founded the Polish Radio Experimental Studio in 1957, remaining in charge there until 1985.

Again, the composers chosen, aside from Penderecki, are new to me and I've no idea how representative these works are, if they are at all. Bogusław Schaeffer's "Antiphonia" reminds me of quasi-similar vocal work by Penderecki (though who influenced who, I don't know), with clouds of voices intoning in harsh harmonies, ably (and, to my ears, more interestingly) reinterpreted by Phil Durrant on solo violin. [I noticed in the course of writing this, that Schaeffer's music was used by David Lynch in the soundtrack for "Inland Empire".] His "Assemblage" is an itchy piece constructed largely from pizzicato violin fragments (an 8-string device he designed himself) and prepared piano. As interpreted by Sledziecki, it's a little "No Birds"-Frithian, but not bad. "Collage", by Rudnik, fits more cleanly into other tape collage work of the era, an excellent, bumpy piece incorporating tape scraps rescued from the trash bin and some wonderfully fluttering, deep electronics. It's rendering by Pałosz and Sledziecki is ok, if a bit over-dependent on fuzzy guitar. I'd never heard Penderecki's "Psalmus" (1961) before, for electronics (possibly with vocal material as a source?) but it's of a piece with parts of his "St. Luke's Passion", eerie and haunting. Tilbuty's solo version on prepared piano is as gorgeous as one would expect but also sends him into an area subtly but distinctively different from his more frequent Cage/Feldman sensitivity--for Tilbury nuts, like yours truly, reason enough to get this set.

Mazurek's moody "Episodes", featuring flutes and (strings, is an extremely lovely, dark piece and is given a rich reading by Durrant, Prevost and Pałosz while his "Esperienza" is a powerful engine of explosives and drones; the quintet performance is lively and rich, featuring a wonderfully spiky Tilbury "solo". Rudnik's "Dixi" closes out Disc 1, all thin slivers of electronics, like dozens of aeolian pipes, coalescing and dispersing. Appropriately, it's interpretation is given over to Pałosz who produces an extraordinarily dense, harrowing and intricate reading, in many respects outdoing the original, no mean feat.

Disc 2 closes with an extended "Homage to Boguslav Schaeffer's Symphony". Not knowing the original, I can only listen as though to an improv (which this essentially seems to be) and say that it's an enjoyable enough one, if nothing to much out of the ordinary (though, again, lovely Tilbury)

The set includes an extremely informative booklet, with much info on the composers and their work. Again, an excellent job. 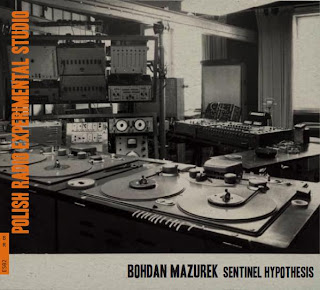 Well, now I know at least a little about Mazurek via this double disc set documenting work from 1967-1989. I'm loathe to write very much about it as I feel especially ill-equipped to comment on this area of music, one which I'm reasonably ignorant of, especially in bulk form like this. Individual pieces from different composers, as above, seem more graspable and, if you will, compartmentalizable. Much of Mazurek's work, as presented here, falls into what I hear as a genre of electronic music that I have difficulty differentiating among--taped electronic sounds arranged in collage fashion, a tendency toward the usage of histrionic voices, things that often hit me as dated and effects-driven. I'm sure I'm missing a good deal, not hearing these works in all their fullness.

Here, a good bit of Mazurek's music feels similarly. There are exceptions--"Canti", is quietly subtle and quite beautiful, made up of "low, vibrating string of [a] harp, noisy crowd in a room, woman's voice, processed whisper...". "Sinfonia Rustica" is odd in another way, an enjoyable bed of natural sounds with a strangely jazzy oboe occasionally keening atop. Others are half and half, like "Daisy Story" (1977-79), which meanders around for much of its 19+ minutes, then launches into a kind of minimalist explosion, though one that's more purely mechanical than rhythmic in a human sense a la Reich.

So while much of Mazurek's music doesn't particularly excite me, I can easily imagine listeners more devoted to this area finding a huge amount to enjoy here. As with the other Bôłt releases, the packaging is excellent and the liner notes very comprehensive. I'm quite happy to have received at least a little bit of exposure to the world of PRES and the Polish experimental scene in general.