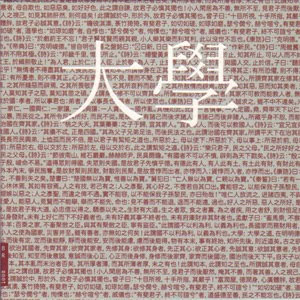 So we have, at last, a full recording of the Cardew piece, something that had previously only been available in fragments going back to an early issuance on Deutsche Grammophone. This one was performed during July 2010 by about 60 people, musicians and non-musicians alike (in adherence to the composer's instructions), most of them Polish and, fwiw, no names that I recognized.

A question immediately surfaces, however: Aside from documentation, of what value is a recording of a work like "The Great Learning" which, as near as I can determine, is a resolutely participatory piece? Even in live situations (and I know a performance organized by Nick Hennies is upcoming in Austin), I would think that the obvious thing to do would be to allow for extra seats, instruments and scores, encouraging audience members not to merely sit and listen but to actively engage with the work. Being at such an occasion and simply listening would strike me as missing the point. [Nick, in a facebook back and forth on Cliff Allen's page, gave reasons why inviting anyone who attends to sit in might not be such a good idea; the score is more complicated than I realized] Yet here are these four discs, some 270 minutes of sound, sitting in my room--what else to do with them?

So, with some reluctance, I sit here and try both to imagine myself amongst the crowd and at the same time, evaluate the music. Now, I fully admit, that I'd be uncomfortable participating in a performance of "The Great Learning", particularly the intoned, vocal sections. Chairman Mao, who was directly responsible for the deaths (largely by starvation but directly as well) for untold millions of people (between 40 and 70 million by most estimates) isn't someone I hold in very high esteem, whatever other worthwhile qualities he may have had. [As Nick points out below, I was greatly mistaken about this--for some reason, I always associated this text with Mao, not Confucius---my mistake] This may well color my appreciation of the sounds heard here as, almost inevitably, I vastly prefer the instrumental passages to the vocal ones. Not that these are "great" or terribly fascinating to listen to, but at their best (ok, yes, the percussion sections) one picks up on the communal excitement and sense of interpersonal unity that one assumes was one of Cardew's goals. Sometimes, as in Paragraph 2, with the drums and long-held voices, both combine quite effectively and one gets the sense of the kind of potential that's here. The more drawn out and indecipherable the words the better, as far as I'm concerned, so Paragraph 3 (which reminds me very much of parts of Centipede's "Septober Energy"; curious if Tippett drew inspiration from this work), all putty-like and elastic, functions well. All sections have their merits; I found Paragraphs 1 & 7 the most rewarding musically, 4, the least, fwiw.

Personally, I'm glad to have this document and I imagine anyone with a serious interest in Cardew will feel the same. But it's best considered as a part of his oeuvre, perhaps not so much as a recoding one intends to listen to as often, say, as the piano pieces or the better readings of "Treatise".

I don't really understand why you would go into "The Great Learning" assuming ahead of time that it's not worth listening to unless you're participating. I got goosebumps the first time I heard the organ part on paragraph 1 in person and I've regularly had similar moments in listening to the choir rehearse (and also during the existing recording of Paragraphs 1 and 7 prior to this new complete recording). The fact that this music is performed in part by "untrained" musicians should in no way discount it from the same consideration as any other piece of music (if anything, this aspect emboldens it's power as proof that you needn't be a schooled performer to create something as breathtaking as some of the moments in The Great Learning are).

As for the Mao Tse Tung comments, the music is based on a text by Confucius, not Mao and the music was composed largely before Cardew wrote his most militant texts based on Maoist and Marxist ideas. At it's core this is music focused on self-discipline and communal music making (something that is sorely missing from most experimental music these days), innovative (at the time) compositional techniques that were truly inclusive of anyone with an open mind regardless of their musical "skill" level. I don't feel the need to remember millions of dead Chinese citizens when I hear this work as it has little to do with hearing it in 1971 or now in 2011. Yes, of course, Cardew was a Maoist (and a dogmatic zealot) but to judge the music only on that is short-sighted and unfair. It's not a work in support of Mao, it's a work in support of and solidarity with people.

Thanks for the correction on Confucius vs. Mao, Nick--I'm embarrassed. For some reason, I had it in my head that it was Mao; stupid mistake. If nothing else, the dates of the paragraphs should have told me otherwise.

It's nothing to do with non-musicians being involved--that's totally fine, welcome even, by me--more that it strikes me as the point to do it rather than to just listen to it. Perhaps it's different when one is in the midst of a large group of people performing, but I've never, on prior recordings, been as knocked out by the music itself as you. Not that it's directly comparable, but I enjoy the recording of Eddie's "Silver Pyramid", from around the same time, much more, a work that also encouraged non-musicians to participate.

But hey, were I in Austin this weekend, I'd come to your show hoping to be shown the error of my thinking.

I appreciate the review, as always. I would really like to get this recording. Sorry if that came off more severe than intended. You have caught me at a very sensitive and also drained time (spending almost every night of the week on this music). :)

But, don't want to try and convince you that you should definitely love this music but it's been something that's been very dear to me since I first discovered it in college (and who knows why certain people are drawn to things more than others). Especially since being involved in actually presenting the music, it has revealed even more levels of depth than I had anticipated. He was really an amazing composer despite his late writings seeming a little bit ridiculous now.

hey, no problem, Nick. I like his mid 70s piano pieces way more than most people. No accounting for taste!