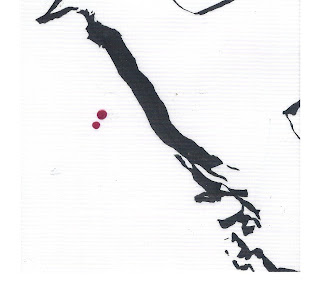 With Album Title of the Year neatly sewn up, we proceed to the music provided us by Rombolá (flutes, tiles, ceramic objects) and Doneda (soprano and sopranino saxophones, radio, objects), recorded in 2008. I've been familiar with Doneda's work for well over a decade but have only encountered Rombolá on a handful of occasions. Still, what expectations I had of the music turned out to fit pretty well, with some exceptions.

The pair concentrate on breath tones at the harsher end of that spectrum, whooshing through the space, augmented by valve pops, leavened by hummed multiphonics, all in a loose framework that maintains mood throughout each of the five pieces. Well handled, though the general approach isn't going to sound appreciably different than much of what we've heard from, at least, Doneda, for some time. Except for the non-woodwind parts, that is. By including Rombolá's ceramic work and whatever objects that Doneda is manhandling, especially on the first and last cuts, the pair manages to elevate the music into a new and exciting territory. There's something wonderfully chaotic about that clangor mixing with the long, reed-generated tones. Those tracks make the disc worth hearing and, I hope, bode well for future investigation. 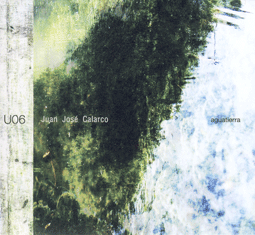 A melding of field recordings near canals around Xochimilco (an area of Mexico City) and improvisational recordings with electronicist Pablo Reche. As has happened dozens of times in the past few years, I'm presented with a item that's tough to evaluate in any sensible way except to remark on how generally enjoyable and/or immersive (or not) I find the recording and whether or not there's something "extra", some emergent quality in the music that strikes a special sweet spot. Well, it does provide auditory goodness, Calarco's choice of sounds tending toward a mixture of wet wooliness, layers of hums, sloshes and warm, wooden knocks, basically straddling the areas implied by the disc's title. It's not overly dramatic, often subsiding into a quiet mix of delicate, everyday sounds, which is welcome. Is it more than that? Not that I can hear. This isn't necessarily a criticism as, in essence, it's perfectly enjoyable to hear, but once heard, it doesn't leave me with questions, hasn't incited any new avenues of thought.