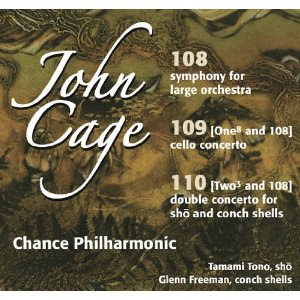 OgreOgress continues its documentation of the late "number" pieces of Cage with this excellent and imaginatively constructed set, issued on audio DVD. (btw, the three tracks each last 43:30 :-))

"108" (the numbers in this series indicating how many performers were involved) was by far the largest ensemble for which Cage ever wrote. The task is undertaken here by the 11-member Chance Philharmonic, presumably overdubbed to fill the necessary seats. The piece is first presented as such, next (in the guise of "109") with the simultaneous performance of "One8" (originally for solo cello, here played--I think, it's not specified--by Karen Krummel) and finally "110", which is "108" augmented by "Two3" with Tamami Tono (shō) and Glenn Freeman (conch shells).

"108" itself, even to the knowledgeable Cage listener, comes across as a surprisingly traditional sounding work although Cage, as he would say numerous times over his career, thought that he was finally creating the music he always wanted to. Long-held notes by winds and strings with the odd, brief hiccup from trumpet or percussion waft by, overlapping at irregular intervals, all very serene like fronds swaying in the breeze. Tonal enough, with some sourness and piquancy, the choice of tones and intervals chance-generated, I take it. Several periods of silence are interspersed as well, layers of mist periodically obscuring the vegetation, allowing for contemplation of the listener's ambiance. The addition of the cello piece in "109" projects a slightly darker, eerier tinge onto the work, the moments where it sits alone being particularly striking. "One8" was written for Michael Bach who invented (? it seems to me I've heard others make this claim, not sure) a curved bow capable of playing all four strings at once and the effect remains striking.

The addition of the shō and the mic'd conch shells filled with water to various degrees provides more of a contrast, the mouth organ's sounds splaying into the foliage, tendrils curling around stalks and blades, the occasional gurgle of the conch giving indication of the liquid below. This additional pair of sounds really fills out the composition which, seasoned though it is, can well utilize just this much additional flavoring. The push/pull of that East/West dynamic plays out well too. Of the three pieces, this one seems to me the fullest.

But all three are worth hearing. Another very good job from the OgreOgress crew.