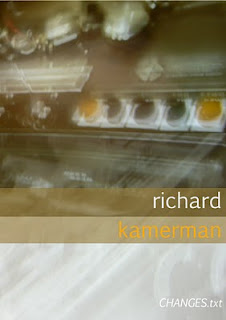 I do enjoy me some obsessiveness on the part of musicians. I've almost invariably found a lot to like in Kamerman's music over the past few years, both live and on disc, including his propensity to not be pigeonholed so it's a special pleasure to hear these four variations on a fairly tightly controlled theme, recorded just over two months ago.

There are only three or four elements in play throughout, arrayed similarly on each track, with minor but crucial differences: a very low, cottony rumble, a medium range, large-grained static spray that's iterated in a regular, slow pulse, a high, keening series of tones and a mid-range kind of buzz that reminds me of the tail end of a Jew's harp twang.

The general effect might be said to be of a bleak industrial soundscape but an essential difference occurred to me while listening: most such examples, at heart, sound as though they're constructed, contain gestures, if you will, that bear the stamp of the musician involved. Kamerman has, to my ears, managed to remove himself to a large degree, to have created something that really sounds as though it could be a found recording of a marvelous, empty, throbbing, sputtering space. No mean feat. The static may come in one burst here, two there, the high-pitched whine varied within itself and as to when or how often it appears.

Only the last, brief (two minute) track, suitably titled, "in which I let go", shifts gears, a series of random knocks and bumps, almost as though the power has been turned off and the pipes begin to clank as their temperature subsides.

Excellent recording, do give a listen. 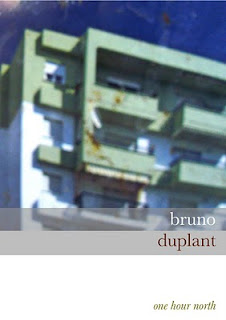 An intriguing selection of three very different pieces from Duplant, a bassist who I don't believe I've heard before (as ever, said with great hesitation). "arras, une heur trente d'arrêt" combines field recordings, largely of a mother and children speaking (in French), small percussive objects, between-radio-stations type buzzes and, notably, someone whistling a melancholy almost-tune. It's a very full, vivid and wonderful work, not a little reminiscent of Ferrari; something about the combination of sounds is both warm and subtly disturbing.

"one for for five (who goes slowly goes" is indeed for a quintet (Vanessa Rossetto/viola with small motors, Paulo Chagas/bass clarinet, Lee Noyes/inside & outside piano, Phil Hargreaves/flute and Duplant/double bass and graphic score). The score is included on a separate card, where it's titled "one four for five"--not sure which is correct--and it seems fairly straightforward, each instrument having approximately timed sections in which to play with both graphic and written descriptions ("long notes", "what you want with rhythm", etc.). The result is thick and, not in a bad way, sluggish, like a viscous liquid. It's engaging enough, though marred, to my taste, by many of Chagas' contributions which tend toward a stale kind of free jazz playing that seems very much out of place here (though, I suppose, it might be exactly what Duplant wanted).

"nord" takes another sharp turn, consisting of field recordings (highway sounds, mostly), double bass and, most noticeably, an old vinyl recording of...I'm not sure what, but something along the lines of an East European brass band playing a kind of dirge (a doina?). Whatever, it's an unusual and enjoyable combination of sources, Duplant confining his sounds to commentary here and there, allowing the traffic and phonograph to define the terrain. Good piece, interesting and largely enjoyable album. 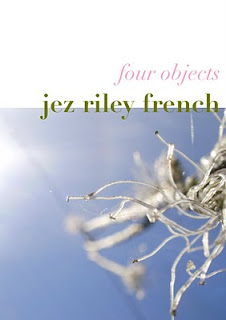 Label owner French's latest self-descriptive offering of four 10-minute recordings sourced from four different objects, straddling that hazy line between science experiment and art (often an imaginary distinction, imho). "a piezo disc slowly breaking..." is a delightful track, full of delicate pings and pops, slightly reminiscent of Xenakis' marvelous "Concret pH", the sort of thing I can listen to for quite a while, the sequence of sounds having that nice blend of irregularity on a small cluster level but a general regularity when one moves up a stratum. His recording of a teasel plant is spiny and woolly, a similar area that Jeph Jerman has explored, but somehow wears out its welcome for me after a few minutes. Odd how some things, inherently not so different, have differing effects, I imagine varying widely from listener to listener. The following track, picking up vibrations within a slate window sill is, again, quiet wonderful, the low, complex hums forming patterns I could happily listen to for hours. The last cut, having to do with sounds emitted by a flask filled with hot water some ten minutes prior to recording, those sounds dwelling in the range of sputters and gasps, I find somehow less compelling, perhaps too one-layered, I don't know. But aside from the basic pleasure one does or doesn't derive from the pieces, they cause one to consider why this is so and, of course, to simply listen more closely, always a plus.

thanks for these reviews Brian

Dear mister Olewnick,
thank you so much for so many good words so heartfelt ...

and sorry, the title of the graphic score is really 'one four for five' (the logic of it is to be find in the score)...