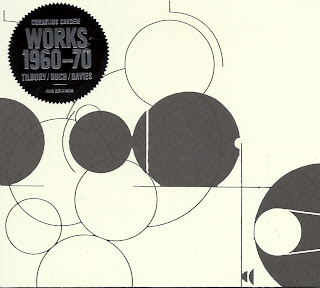 This marvelous release appeared late last year, seemingly out of nowhere, and quite tough to get stateside until just recently. Double-bassist Michael Duch seems to be something of a staple of this Norwegian label, appearing on all three discs herein reviewed, joined for this date by the estimable talents of John Tilbury and Rhodri Davies. The results are gorgeous.

Although five of the six pieces consist of work that falls into Cardew's more abstract designs, incorporating graphic images and post Cagean indeterminacy, the trio opts for a gentle approach that stresses his warmth and, perhaps, reads the scores with an ear cocked toward his future, more populist work. Tilbury...well, this is just some of the loveliest, most sensitive Tilbury you can find, again often referring to the Cage of "Sonatas and Interludes", always remaining ambiguously tonal and always displaying his unerring dynamic and metric senses. One can listen through, concentrating solely on his contributions and come away deeply satisfied. But the others are no slouches either. Davies stays with the "traditional" harp approach (no ebows to be found) and is such a perfect foil for Tilbury, sonically adjacent but with just enough distinction to conjure forth two vines from related species, intertwining, producing complimentary though varied blooms. Duch's sound is rich and deep, occasionally (oddly enough) evoking the kind of sound Dave Holland had back in the late 60s, early 70s, one with just a tinge of an awareness of folk forms.

Highlights? Well, "4th System" is utterly wonderful, a leisurely unspooling of passages that meander off to the side, eddy, rejoin each other, Tilbury nodding to gamelan, Davies taking pointed jabs, maintaining a definite character throughout the work while still imparting an improvised feel. Interesting to compare "Solo with Accompaniment" with the rendition on the Rowe/Malfatti "Φ", arco bass taking the "simple" solo part, a long, sustained tone, while the others clatter and rumble athwart, more rambunctiously than Rowe though, it sounds to me, just as appropriately given the less severe context. When Duch shifts to pizzicato, that aforementioned tonal similarity to Holland is striking and, to my ears, quite welcome. The trio performs a lengthy (some 20 minutes) extract from "Treatise"; inexcusably, the page(s) aren't provided. It's the sparest piece here, though hardly astringent, merely making a more overt usage of silence and sound placement than in the other works. Again, Tilbury is just absurdly fantastic here, navigating the score with delicacy, sly humor and deep appreciation for his late friend.

The kicker is "Unintended Piano Music" (arranged for the trio), a piece that to an extent anticipates Cardew's political song forms of the early to mid 70s. Those works are quite controversial, of course (I tend to like them very much), many considering them retrograde and reactionary. This one, as near as I can tell, doesn't refer directly to an existing ballad or protest song but certain conforms to a regularity of form not heard in his previous music. Low arco bass and dark, deep piano notes lay a ground for a poignant, plaintive harp theme, the piano responding with a troubled denial of the harp's aspirations. Meaning it in a good way: this could be a perfect piece of movie soundtrack, highly evocative, both beguiling and disturbing.

An exemplary album, all told. No excuse whatsoever not to have this one. 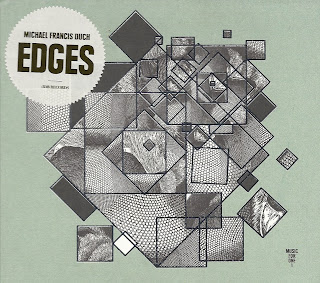 Wolff's instructions for "Edges" (a graphic score) include the wonderful lines: "The signs on the score are not primarily what a player plays. They mark out a space or spaces, indicate points, surfaces, routes or limits." I wish my head could maintain a working reference to other performances of this I've heard, but that's beyond its capability, so I can only take Duch's rendition on its own terms. It's quite active, even vociferous at times and part of me somehow expects more sparseness; sonic density isn't something I usually associate with Wolff. Still, it's a pretty exciting, immersive work; Duch's technique might be a bit flamboyant for the material (imagine Barry Guy doing the same piece) but just when you think he might be going too far in the pyrotechnic direction, he reins things in. The Brown is more pointillistic, rough smudges of tone, kept fairly short.

Duch expands things quite a bit on the Cardew, varying his attack widely and delivering extraordinarily powerful whipsaws of arco from the bowels of his bass, cleaving the air--very dramatic indeed, nice job. With Feldman's "Projection I" (1950), we return to a sparser mode, plucks and strokes arrayed on a field. The Projections were intended to be played quietly and Duch does so, giving the brief piece something of a Twombly-like character. Skempton's "For Strings" is a minor revelation here (not sure if I've heard another version or not). There's a lovely airiness in effect as well as a kind of playfulness, an extended section of dry, raspy bowing that sounds like wind whistling between ancient timbers.

A tough proposition, taking on these pieces by oneself but Duch does a pretty decent job of it though, from the evidence at hand, I think he readily benefits from having players as able as Tilbury and Davies surrounding him. 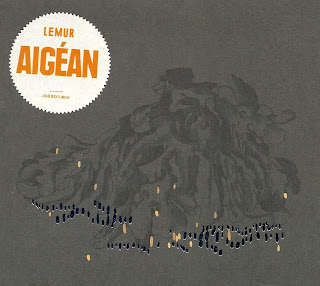 Lemur is a quartet of Duch, Bjørnar Habbestad (flutes), Hild Sofie Tafjord (horn) and Len Grenager (cello), a chamber-like ensemble, improvising. For me, while engaging enough and very well and energetically played, it doesn't quite work largely because the language employed is far too derivative of contemporary classical music tropes. In other words, it sounds as though their palettes are taken from all the techniques they've learned and mastered through their careers rather than reacting to the moment, the space, the personalities of their collaborators. Very much akin to a "free" jazz session wherein one hears recycled Coltrane, Ayler, etc. Inevitably, a kind of sameness settles in and there's little feeling of true exploration occurring. Good free improv is difficult, no matter the instrumental proficiency of the musicians.