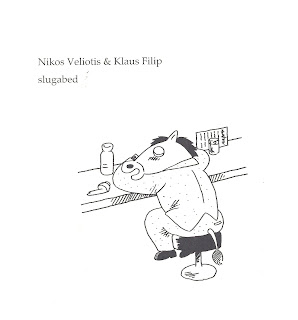 I don't think there was much doubt about how this release was going to sound, generally speaking. Not sure if I've ever heard anything but drone-related material from Veliotis (except perhaps when he was sawing apart his cello and even then...) and, indeed, for his part, he maintains an hour's worth of sustained drone here. He does so very well and it might have made for an an enjoyable enough effort were it just him but, joined by Filip, presumably using his lloopp software, the result is endlessly fascinating, even magical. Veliotis seems to stay pretty much centered around a given pitch, varying the harmonic cloud around it, the dynamics and the raspiness of his attack. With this as the base, Filip interweaves his output in marvelous fashion, sometimes trying to get close to the cello sound, becoming all but indistinguishable from it, more often enveloping it in cushions of air, hot and cold, calm and rushing, silvery, breathy, cavernous and claustrophobic. The tension is constant and invigorating. 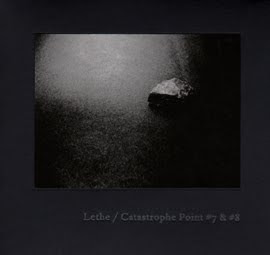 I greatly enjoyed my first exposure to the work of Lethe (Kiyoharu Kumwyama) last year on Catastrophe Point # 5 (Intransitive). Here's a continuation (I guess I missed #6), a two disc set recorded in 2004 (Lausanne) and 2006 (Edinburgh). The milieu remains the same: extremely dark, forbidding, vast and post-industrial, shards of sound echoing into the depths, metal bars dropped onto hard floors, wails, alarms, groans, heavy steps...you get the picture. Gradually drone-y electronics filter in which take it out of the processed field recording area, into more of a dark ambient one; I prefer the former, though Lethe handles everything with deftness. Piano enters, low and foreboding, reminding me a bit of some of Asher's work, there's a crescendo of rushing winds and clanging metal, all hugely dystopic and effective as such but...at some point it blends together overmuch, feels a bit too easy to achieve; the sense of exploring the darkness I had in the earlier work isn't as apparent, as if Lethe has mastered this particular realm and can display his artistry at will.

The second, more recent recording is sparser and better off for it, no less dark but with a more interesting atmosphere, not merely oppressive but grimy and empty as well. There's less "musical" input, more noise. The final piece, just echoing thumps and bell tones in the darkness, is quite impressive.

Still, it's a ton o' murk, probably a larger helping than most can take in a sitting, but if you're so inclined, Lethe doth provide. 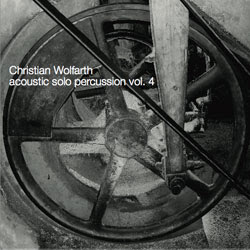 In which Wolfarth continues his quixotic journey documenting various percussive attacks on 45rpm vinyl, one approach per side. Side G is "Cabin No. 9", a study in cymbals, what sounds like a large cymbal on a snare set up like sock cymbals, opened, closed and battered for four minutes plus. It's an odd thing for me to judge in any way--it kind of just sits "out there", with no context but its own sound, which is enjoyable and rich enough. It's difficult, though, to get past the "example" nature of the track.

"Well Educated Society" is six minutes of deeply bowed metal, writhing and groaning, somehow coming across as much more of a fully realized piece than the obverse side. It's dark enough that it would fit right into the Letheian universe above but has the saving virtue of a well-realized duration. The subsidence into a troubled drone at its conclusion is quite moving. Worth it for this side alone.

Brian, agreed on Slugabed, a lovely CD. There have been examples of non-droney Veliotis. Some of the new Mohammed three disc set steers clear of that area, and may I mention the recent Looper CD? ;)