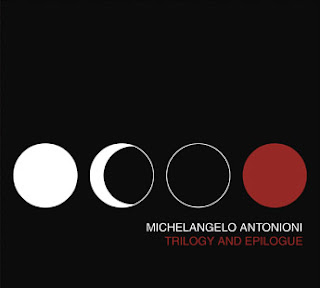 A nice idea and an impressive cast assembled for this two-disc set. Music inspired by l'Avventura, La Notte, l'Eclisse and Deserto Rosso, arguably the strongest section of the director's oeuvre with musicians including Olivia Block, Roel Meelkop, Ben Owen, Lawrence English, Asher, Richard Garet, Gabriel Paiuk, Jason Kahn and many more, 24 tracks in all, some 136 minutes of sound.

I'm generalizing, but I do feel that the pieces coalesce around a similar sensibility, one that's fittingly appropriate to the Antonioni of this period: a certain bleakness, a sense of isolation, yet a fascination with textures that are often, in a post-industrial way, beautiful. In fact, I thought many of the pieces could serve as quite able soundtracks for that last, amazing shot in "l'Eclisse", tracking toward the streetlight, replacing the piano in the film. The sounds tend to involve held tones, in layers, sparse and dry, with the odd filigree spinning out like a steel shaving (there are exceptions, of course).

It's also a remarkably consistent collection. I really didn't find a single track out of 24 to lack some value. By the same token, only a couple struck me as extraordinary in any way, those being the pieces (all tracks are untitled) by Asher and EKG. Other fine contributions are heard from Olivia Block and Adam Sonderberg, Gabriel Paiuk and Jason Kahn. I'm not sure this is a criticism, but the uniformity of quality of the pieces and their Antonionian (!) air sometimes caused them, in my mind, to blend together a bit. I'm not sure that part of me might have preferred a single disc. That's a quibble, though.

Oddly enough, I also found myself thinking that you could do worse than this set insofar as introducing curious but naive friends to this area of music. The work is certainly sold and rich enough to hold the attention of the innocent, inquisitive listener. 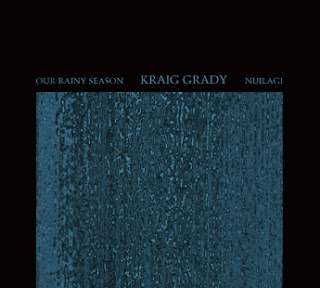 A new name to me, Kraig Grady is apparently something of a fixture on the LA scene having absorbed Partch's influence via studies with one of his apostles, Dean Drummond. Oh, he's also a resident and perhaps chief honcho of the mysterious island-nation of Anaphoria, which land mass Google Earth has conspiratorially removed from its maps, but that's another story/

Well, actually, no, as the two pieces presented herein attempt to evoke the complex relationship Anaphorians have with their rainy season, The aptly titled, "Our Rainy Season" is a scored piece for reads (Jim Denley, bass flute, alto sax and wooden flute) and string bass (Mike Majkowski), multi-tracked, each musician improvising on "single notes with extreme pitch accuracy to within one tenth of a cent." It's long, a bit over 49 minutes, but works remarkably well within these parameters. Not only is that "single note" approached in a seemingly ever-changing variety of ways (each lasting several minutes so that there's no sense of haphazard rushing about) but, perhaps by virtue of that limit, there's a very strong structural sense felt throughout. I'm not sure that the single-note specification holds absolutely at all times but often enough, the range of timbres and attacks provides a really impressive amount of variety and easily holds one's interest. A very fine piece of its type.

"Nuilage" is for three metallophones (Grady, Erin Barnes and Jonathan Marmor). I think it's virtually impossible to play finely tuned metallophones of any ilk and not produce an attractive sound. It's also difficult to escape that gamelan sound, often an awkward, if enticing, trap for non-Indonesians. More of an issue here, for me, is a lack of that tensile strength of the previous work. Here, while the sounds are enjoyable enough (and some wonderful sonorities are achieved about 3/4 the way through), the piece meanders a bit, never concentrating its focus with the obsessiveness shown earlier. One feels the need for dancers or shadow puppets to complete the picture.

Still, a good effort and I'm glad to have finally made Mr. Grady's audio acquaintance.

Five minutes before reading your post, I read this about Antonioni.

Thanks for your thoughts Brian. Rather than from the standpoint of a standard compilation, 3+e (like the Ozu project) was intended to be presented as one body of work, so the cohesive uniformity was intended on my part. Of course the track order (and flow) is very important in accomplishing this goal. I also chose not to list individual track titles for the sake of keeping the focus on the whole rather than individual parts.

As for Kraig's CD, it was my idea to include the second track because I thought they complimented each other in a subtle way while straying from the usual predictability of a single track ambient album. I also wanted to give people an idea of his previous work, plus I found myself playing both pieces over and over without growing tired of them, so I figured 'why not'? :)

I am quite curious as to what other fine tuned metallophones as Lou Harrison might be the only other one that comes to mind, and both that and the one reviewed sought out a relation to Indonesian music deliberately. I am not sure if being trapped is quite the relationship. Grady's work preceded Drummond's work in Just intonation and not a result of that by almost 10 years

Wouldn't, for example, most gamelan ensembles be "finely tuned"--maybe not is a Western sense, but certainly in a Balinese or Javanese one? Maybe not! If so, my apologies.

I do think there's a certain trap, attractive though it may be, when artists from one culture seek to (overly) imitate the work of another. I wouldn't make a hard and fast rule, but there seems to be a fine line between influence (unavoidable) and emulation. And, to my ears, the most worthwhile results have been achieved by those who acknowledge the influence then consciously strive to go in a different direction, e.g., AMM and black American jazz.

Sorry for the time-line confusion vis a vis Drummond--was going from the wiki article on Grady which indicated a teacher/student relationship.

[Could not find a way to leave a private comment, so please pardon]
I am sorry the reference was too strong to gamelan music for you. It was unintended, but i can see why the places with hockets especially might give that impression. Fair enough. But i think Indonesians would be at a lost with this music too, not finding much they are familiar with. I had no desire to imitate what they do here. When i have, it sounds quite different. Perhaps being in Australia, It being the neighboring country. Far from England and the US .