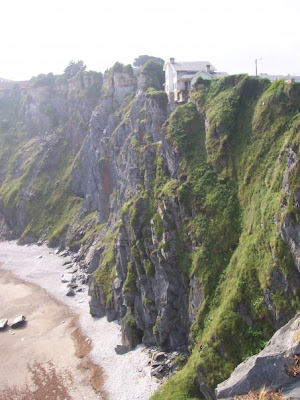 This was a somewhat different vacation than most as one of the main purposes was to try to get a feel for what it might be like to retire to this region, that is, Northern Spain, particularly Asturias. So, much of my mental energy was spent weighing the pluses and minuses of a given area, how comfortable or not it felt imagining actually living here (oh, and taking Linda's feeling into account as well!)

We agreed that of the places we visited, we loved the area around Llanes, especially the lovingly named hamlet of Poo. Llanes is a small town (pop. about 8,000) that caters to tourists in the summer months but is decidedly pleasant for all that. Poo is 3K (see, how I'm already adopting that bizarre measuring system?) to the west, a collection of houses splaying out into the adjacent farmland as well as having its own beach or two; the north coast is lined with hundreds of these small, scalloped beaches, gorgeous little tracts. Gijon, a city of some 280,000 is also quite attractive, but at the moment we're gearing more toward a quieter area. We'll likely return in a couple of years, spending a couple weeks in the Llanes area, scoping things out more thoroughly.

Some pluses registered during the trip:

--the landscape. Included in this area, the relative undevelopedness of the region. Asturias, the province, has a population of 1,000,000 or so and it's a only bit smaller than Connecticut. More than half of this is concentrated in two cities, Oviedo and Gijon, so it's pretty wide open. As the distance from rugged seashore to sizable mountains tended to be only five to ten miles, the terrain was wonderfully vertical with nary a flood plain to be seen.

--the people, who almost to a one were exceedingly pleasant. Bland maybe, but pleasant. I don't think I ever encountered a street argument, rarely heard more than one or two car honks a day. Everyone was relaxed, ambling around taking paseos, a wider generational range than you find in NYC. Now, some of this pleasantry doubtless stems from the racial homogeneity in play which is a bit uncomfortable. I'd say 98% plus of the folk we saw were Spanish with a smattering of Africans (Nigerians, I think, relegated almost exclusively to the street sales of knock-off bags and such) and Central Americans (more often than not, begging); I'm not crazy about this. Then again, there's virtually zero US tourist presence there (a good thing!) so I suppose I stand out a bit as well.

--other small things: cell phones exist but you don't see three out of every four people with the things permanently affixed to their earholes. Ipods also exist, but I almost always only saw them being used by joggers or bikers. Not sure is these two things are economically derived or stem from social conventions, but I'm hoping the latter. Drivers are polite. Fast, but polite. You see many public workers acting to clean or beautify the area, planting flowers, trees, etc. One night in Gijon, there was a festival of some kind, fireworks at midnight. The next morning when I went up to my favorite park, there was party debris--bottles, paper and other garbage--strewn across one side of a hill there. I came back two hours later and it was gone. People seem to take care with small details as a matter of course. There was a general sense of respect between citizens that you don't find here. Very little police presence and zero sense of impending criminal activity. Beautiful, small beaches with incredible rock formations. Caves with neolithic paintings (I visited one, Tito Bustillo). Old buildings; we stumbled across, outside of Oviedo, the oldest standing Christian church in Europe, built in 872. This doesn't happen often in Jersey City.

Minuses, insofar as actually living there:

--The isolation. I couldn't have imagined even considering the move pre-Net but even so, one has to deal with great distance between friends and family. A vacation is one thing, not sure how that would play out over a longer term.

--As nice as the people were, I didn't get the sense that there was a huge amount of intellectual or aesthetic ferment in the area. I could have easily missed it, of course, and am aware of several compadres around here in Galicia but, for example, bookstore sightings were rare and I didn't notice any performing spaces or posters for same. Not even music clubs. Outside of Bilbao, few modern art museums or galleries; in fact, now that I think of it, I don't recall seeing a single gallery, even an awful one, in Gijon. So there's some concern there.

And too many men were wearing pastel-colored sweaters tied around their shoulders. Far too many.

Anyway, a decision won't be made anytime soon. We'll likely go back in a couple of years, spend two weeks around the Llanes area, investigating more thoroughly and see where things stand then.

As is, I can only recommend visiting there yourselves. It seems to be entirely off the US tourist map; reason alone to go there.
Posted by Brian Olewnick at 6/27/2009 08:15:00 AM

Very good to see that somebody likes the Llanes area.

Me & my wife ( belgians) spent a few days there ( we intended to stay for one night and ended up staying there for 4 days)in 2006 while visting Norhtern Spain , green Spain.
Hotel Sabmllon is truly good.

I'm sold (on a visit). Thanks for compiling such a detailed travelogue here (and elsewhere).