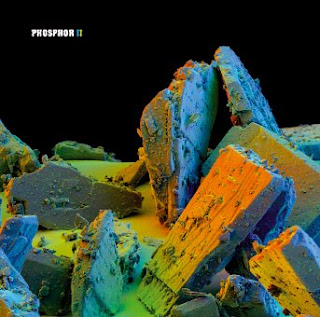 Waves of crunchy goodness. I saw Phosphor in Nancy, in 2002 (I guess just after their first recording?) and the performance has stuck with me; the largish ensemble with an unusual combination of sounds, balancing the electric and acoustic in a unique way, and tending to straddle the edge of the audible. So I was somewhat surprised at how...rambunctious this release is and, initially, may even have been a bit put off. Silly me. It's knotted, abrasive and gnarly all right and all the better for it as the palette has substantially widened and the concern with improvised structure is thereby foregrounded. That palette is interestingly recognizable--I think I'd pick this band out in a blindfold test, something about the combination of the grainier (Beins, Krebs) with the harshly airy (Dorner, Hayward) and the relatively smooth (Renkel, Schick), with Neumann as a wild card, combined with the clearly high level of musicianship, sets this group apart.

So even while the character of the tracks varies widely, and it does with respect to volume, density, fluidity, the overarching tone says Phosphor. That previously mentioned structure is felt throughout; there's a real built aspect to the music, a fine plasticity. A kind of gracile blockiness emerges, a stumbling forward that's balletic. New angles protrude consistently, right up to the last cut with its plangent plucked strings.

One of the stronger releases I've heard this year; get it. 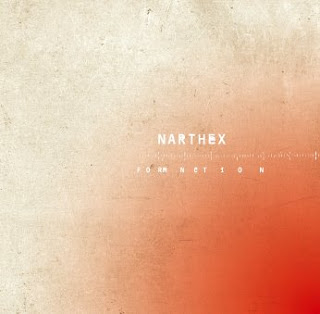 OK, talk about yer conceptualism. I think what's the case in the first of the two equal length tracks is that the sounds originally produced in six improvised situations by Marc Baron (saxophone) and Loic Blairon (string bass), after having been resegmented into six excerpts thereof, have "simply" been replaced by two sine tones of 1000hz and 500hz, any ambient sounds having been digitally erased. Most of the source performance was, presumably, rather spare, so one is presented with one of two tones, occasionally overlapping, laid amidst pure silence. It could be dry as a bone, but somehow it's not. Richard, in his write-up mentioned repeated xeroxing; I found myself thinking more of the solarization process used (still?) in photography, wherein the image is increasingly abstracted toward either black or white, often resulting in a kind of fine line drawing. It has a resoluteness that's ultimately winning, though it'll try many a listener's patience.

Bold move to place that cut, the supremely spare one, first. When the second, acoustic, version appears, it's difficult not to feel that someone's thrown open the windows. Fascinating to re-hear the sounds in their "natural" state, all the depth and variation (though still spare) that was transmogrified previously. Again, these are six five-minute excerpts from 1/2 hour performances (the first five from the first, the second five from the second, etc., therefore accesses more or less randomly). Still, as a suite, they're kind of wonderful: smudges, taps and punctuated shrieks, unhurried but urgent.

A unique release, one I quite enjoyed.

hm curious about that narthex, bordering on "suspicious." i'm all for conceptualism and even sometimes aridity, but i'd like it to be motivated in some way. i somehow find projects that aim to sort of "deconstruct" the conventions of improvisation a bit perplexing, in that a) those conventions aren't codified among THAT many people, and b) that sort of deconstruction is semi-implicit in the natural development of the music and the dialectal approach that implies.

so. . . interested that you and richard are both enjoying the narthex record and curious to hear it, but still finding it hard to shake that "suspicion."

in the sine wave version, do the tones change volume and/or have any kind of envelope, or do they just turn off and on?

"in the sine wave version, do the tones change volume and/or have any kind of envelope, or do they just turn off and on?"

pretty sure it's just off and on, static sounds for the duration they're present, also any room sound has been digitally erased.

you haven't heard it yet, though, jon?

ps - ACK! the word verification thing below is "alito"!

no, I have, once through yesterday, I commented on IHM.

yeah, i saw that after i commented. the "pretty sure" was confusing. so, the tones never change in volume or pitch, and just turn off and on, and all are the same volume? weird.

That they do, but maybe because of variations caused by the room in which you're listening, you do tend to hear very slight variations in the tones, phantom or otherwise.

Somehow, they struck me as more alive than I would have expected, more than "similar" sine tones in some Lucier, for instance. Not sure why.

'Phosphor 2' is lovely. For me they are the best large improv group. The long-term familiarity with each other's work within and outside that ensemble means that they can avoid the lowest-common-denominator drones etc that large group improv so easily falls into. And as Brian says, this release moves on from their first disc in interesting & slightly unexpected ways. Highly recommended.

But for me the Narthex disc just doesn't give enough aural pleasure - especially the sinewave track. It crosses that border which Jesse describes well into a kind of conceptual aridity. I might give it one more try, but I very much doubt I will be able to be as charitable as some reviewers have been. I'm all for music being underpinned by interesting concepts (viz my hero Cage), but if in so doing it fails to offer sonic pleasure or beauty then I quickly get frustrated.