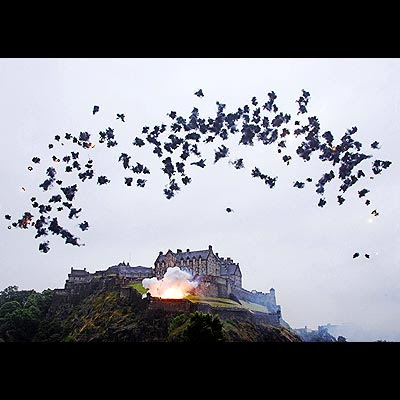 So, in Gijon now for six days, stationary enough to try and post something.

(btw, extremely beautiful here in Northern Spain. Unbelievable landscapes, very lush, very dramatic. We just came in from the tiny hamlet of Poo, just outside of Llanes, a gorgeous, tranquil place to which I hope to return.)

We were in Bilbao for a couple of days, the primary purpose to visit the Guggenheim there. The third floor, which houses its permanent collection, was closed for new installations, something of a disappointment. I saw there was a large Serra install, though, several enormous pieces similar to those at DIA Beacon, laid out in a long room. Very enjoyable, as always, though it's interesting, I find his works fare better in rooms in which they barely squeeze in, where the space becomes at least a bit oppressive. Minor quibble, though. Off to one side, there was a room with models, drawings and a video interview of Serra, which was quite good. I was sitting there, watching/listening, when a horde of schoolchildren found their way into the main exhibition space. As tykes are wont to do, they entered the sculptures and a crescendo of hoots and hollers began. Little by little, it overwhelmed the voices in the video, rendering them entirely inaudible. It was a wonderful effect.

In the atrium were hung several white automobiles with "explosions" of light bulbs issuing from them. This was the intro to the exhibition by Cai Guo-Qiang, but the effect was more like an elaborate auto showroom. I'm not sure which part of which cave I've been hiding in, but his name only rang the vaguest of bells with me and I had absolutely no idea what to expect. The initial rooms featured several large "drawings" made with gunpowder as a primamry ingredient. Some were quite attractive, studies for large scale projects, the nature of which I didn't yet understand. Venturing further in, several video monitors made it apparent that Cai had been involved in performances involving pyrotechnics of all sorts. The videos from the early and mid 90s had a nice raw, guerrilla-like aspect to them; you had the impression that they hadn't all been officially sanctioned.

At one point there were dual projections on a single wall, side by side. On the left were more of the raw events of the kind viewed previously. On the right was footage from the 2008 Olympics ceremonies. Now, I had heard about the spectacular nature of these displays but I retain an aversion to the whole Olympics deal, specifically the nationalistic aspects of it, and I'd watched almost none, none of the ceremonial parts certainly. So I sat there thinking, "Hmm...Nice juxtaposition between the harsh, dark "outlaw" things Cai's doing and the slick, kitsch-filled Olympic crap."

Oh, wait. It's the same guy. D'oh. I'm not sure exactly to what extent Cai was responsible for the Olympics stuff, but the range of his work started to come into focus. There's some beauty there but, perhaps as his fame increased, there's middle-brow shallowness as well. (The 29 footsteps of a giant in the sky was very cool.) It's irritating, really, especially when combined in a single work like Head On: 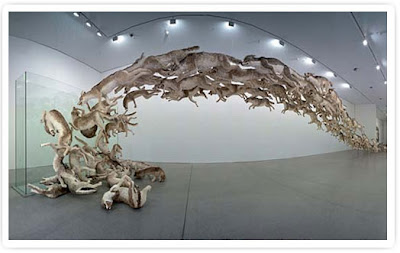 Visually, nothing if not spectacular, you kind of want to apply your own reading, even if it ends up coming close to the artist's which is, essentially, illustrating communitarian group-think, insofar as it can achieve great cohesion and beauty (the arc) but eventually crashes hard into reality. OK, not an earth-shaking pronouncement, agree or disagree. It's a shade or two too explicit.

Many of the works benefited by not peering too closely at their explicit meaning. The black fireworks, one example pictured above, are an example. I found them quite beautiful and evocative on their own, kind of like ink stains on the sky, before being informed of their nuclear aspect, a point made well but perhaps with too much of a sledgehammer, in the manifestation of a black and grey mushroom cloud in Hiroshima.

The gunpowder works also, as lovely as a given image might be, couldn't shake off a gimmicky aura. I imagine other artists have utilized a similar approach. I know that Dali did some engravings of a religious nature worked from plates onwhich nail-filled granades had been exploded, back in the late 50s. More to the point, Cage's smoked paper drawing are quite beautiful; the viewer doesn't particularly notice the smoke in lieu of the entirety of the image. With Cai, once attuned to the process, it interferes with the totality of the work, at least for me. I flickered back and forth between having a quick liking of a work, followed by diminished enjoyment the longer I looked.

But, I have been thinking about it for the last few days, so I do think there's something in there, often.

otoh, it didn't hold a candle, so to speak, to the horse in the Tito Bustillo cave: 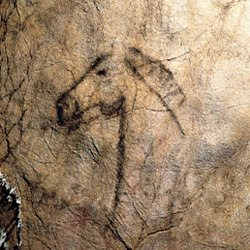 Sounds like you're having a great trip, I'd love to get to the Bilbao Guggenheim myself. I wanted to commented on Cai Guo-Qiang who has a series of his "exploding cars" hanging from the ceiling of the Seattle Art Museum. I have to say these are among my least favorite contemporary art pieces in the SAM. Those sort of pieces just smack of excess and I don't really think they say much. I mean I'm all for comments and criticisms of car culture, but those feel too celebratory to me.

However the segment in Art:21 (BTW you can get Art:21 from Netflix, and much of it is worth watching IMO) on Cai Guo-Qiang showcased some amazing work. The process on those gunpowder pieces is really cool to observe and those pieces feel really connected to China to me. The program also featured the initial installation of the exploding car piece and it was way more effective in that situation. He was trying to evoke a car crash or a car bomb on something, staged almost like a film strip. Pretty effective in that context as opposed to the airy lightness of the SAM atrium.


Anyway have a good trip.

amazing pic up top, love that.

brian, you probably already figured this out, but guo-qiang had a big show in new york in the last year or two (forgot where - i didn't make it).

Jesse, didn't even know. I must have had some mental block in place with him. Hard to imagine I could have been muchmore ignorantof his work if I had tried.

I'm jealous.I'm trying to recover from 2 hours of mowing grass in near-100 degree heat.

But,I'm listening to the MOST INCREDIBLE music while recovering:

The version of "Summertime" w/Xu Fengxia on vocals is exquisite!

I watched that Cai Guo-Qiang piece in Edinburgh being created.