Ferran Fages (acoustic guitar), Dimitra Lararidou Chatzigoga (zither). The beauty of the plucked and buzzing string. Sometimes, the music recalls Partch's kithara, both in timbre and in the open, airy freedom he brought to the instrument. There's a certain amount of electronics employed in terms of feedback and, I think, string agitators of one sort or another, generally with effectiveness as on the lengthy "6", a novella of bumps, plinks, dropped objects and hums that grow thin here and there but holds one's attention more than not. Fages always has a tonal core no matter how far afield he floats and seems to have found a like soul in Chatzigoga; there's a warmth present throughout. A smidgen of fringe-Fahey creeps into the especially lovely last track, "12", as guitar notes are bent, allowed to hang, buffeted by jangling zither strings. Good recording, relaxing like strange wind-chimes on the one hand but with a gentle knottiness that lurks beneath the surface. 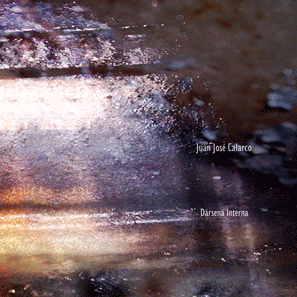 Babelfish yields "internal dock" for the title, which struck me as unwieldy and likely to benefit from a more idiomatic translation until I read Calarco's own description: "an almost abandoned docks area in the Buenos Aires harbour still untouched, preserving the weary and somehow blackened beauty of what seems immutable; the river at night as a presence that dyes the air". And yes, in one form or another, pier-side aural images dominate and are distributed quite well, with more directness than, say, Tsunoda, but with a great appreciation of texture, varying from mechanical to natural (water in various guises) to something indeterminate. I can't say it hits with the same force as the best of someone like Tsunoda, but it's thoroughly satisfying from beginning to end, making Calarco someone I'm definitely interested in hearing from again. He establishes a real sense of evocative, complex place.