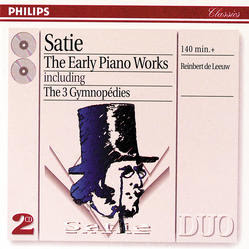 So, I've been listening to this recording quite a bit lately, gradually allowing it to seep into cerebral crevices previously staked out by Ciccolini. Those had been my reference point for so long, unfairly to be sure, but as I think I mentioned previously, on those occasions when I heard other interpretations I almost inevitably found them to clipped and un-nuanced. Doubtless, my sample size was minimal. When I was discussing this a couple weeks back with Chris Cochrane, he mentioned that it was Ciccolini who had the reputation for rushing things! I'd been referred to de Leeuw's take numerous times in the past, I think as far back as early zorn-list days, and finally got around to listening.

First of all, let me say that it's ridiculously great and everyone in the world should own a copy, but that goes for the Ciccolini as well. De Leeuw has a small advantage as far as the specific release goes as he confined himself, on these recordings made in 1977, to earlier pieces wherein cluster some of Satie's most sublime achievements (though I'm dying to hear what he does with the later Nocturnes), so every single piece (33 in all) of this 2-disc set is just so beautiful, so perfectly composed.

Of course, de Leeuw's approach is taking things slowly, not as glacially as others apparently, but substantially more so than Ciccolini. On the more overtly melodic works like the Gnossiennes (what a lovely word!) the result is a more languid, steamier atmosphere. The structure hasn't changed so much, just been pulled like taffy and allowed to sit in the sun a while. Though on such familiar warhorses as the Gymnopedies, the severe time extension can still cause one to reconsider the pieces; the second and third are especially sublime. Which approach one prefers might vary from day to day. One thing, though, the subtlety of tempo variation and touch that I cited in Ciccolini earlier is much less present in de Leeuw, at least to my ears. His dynamic range seems more constrained and he often takes things at a consistent, if slower, pace.

But on more static compositions like "Prelude de 'La Porte Héroïque du Ciel'", the "Danse Gothiques", or the Ogives, de Leeuw fashions something entirely different. The chords just hang there--sometimes he virtually brings things to a complete stop--shimmering in space, the "melodies" broken down into gorgeous fragments; in these pieces the connection to Feldman is clear. De Leeuw limns out the chordal choices made by Satie in a manner that causes one to shiver in delight. They sound inevitable and utterly unexpected at the same time. He tones down some of the fortissimo decisions made by Ciccolini, as in the "Danses Gothiques", where some passages I was used to hearing as strident crescendi are transformed into soft pulses that, far from losing their power, have it enhanced. The Ogives, which I'd often found overly static in the hands of Ciccolini, positively blossom here.

Sometimes, though, I prefer Ciccolini's clipped phrasing. In the "Sonneries de la Rose-Croix", he gives the initial repeated chords a kind of staccato cadence that suggests gremlins creeping around behind gothic columns while de Leeuw takes matters at a stately pace that, while very attractive, loses that extra dimension, that tinge of suspense and foreboding.

But this set is just so uniformly beautiful, it's impossible to quibble. De Leeuw unearthed multiple aspects of Satie's music that, even after some 32 years of frequent, attentive and entirely appreciative listening, I hadn't known were there. Desert island status, for me.
Posted by Brian Olewnick at 6/07/2009 01:37:00 PM

Brian my experience with, and knowledge of Satie is very limited. I will seek this out and listen though now, thanks.

Thanks for this review... I've recently been checking out the Thibaudet recordings (with the horrible title The Magic of Satie). They're altogether too sappy and romantic for me - they seem to miss the elegance inherent in the writing. So, I'm eager to get this recording - I have a feeling it will be much more up my alley.

I tend to favor de Leeuw's interpretations of Satie. So clear (this is a result of superior recording as well as my fondness for his interpretation). However, I have 6 records of Ciccolini that I listened to for many years, and wouldn't consider them "worse" by any means. Though I can't go back and relisten right now as my record player is stuck on 45.

I had a "Woodstock" moment years past,and got a Deutsche Grammophon CD of Leeuw's Satie.