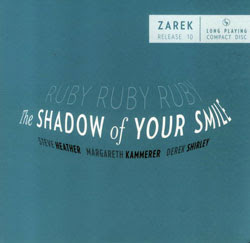 Ruby Ruby Ruby - The Shadow of Your Smile (Zarek)

This generated a little bit of noise over at IHM and I'm afraid I fall into the camp that when all is said and done wonders, "Why?". Ten standards--one is tempted to say "warhorses"--associated with Billie Holiday, ably sung by Margareth Kammerer (also on guitar), backed by Derek Shirley (bass) and Steve Heather (drums), with occasional contributions from Michael Thieke, Axel Dorner, Tobias Delius (tenor sax) and Tom Meadowcroft (organ). I'm not sure it would have worked had they chosen to entirely deconstruct the songs but here they choose to play it virtually straight. Aside from some interesting accents, on a couple of the tracks, from the organ and Thieke's clarinet (easily my favorite moments on the disc, along with the slightly odd treatments of "All of Me" and "How High the Moon") it sounds like nothing so much as what, I suppose, one might encounter in a Berlin bar featuring a mainstream trio. It's fine, it's decently sung and played (nothing incredible, though Kammerer effectively captures some of Holiday's grit and rawness on pieces like "God Bless the Child") but one wonders at the rationale. And how could you not include "Strange Fruit"? More a curiosity than anything else; it's ok, really, and Dorner's solo on the "hidden" track, "Misty", is rather lovely but overall...well, I can't imagine listening to it often, but I guess it does its job well enough, and is even fetching at times. Still.... 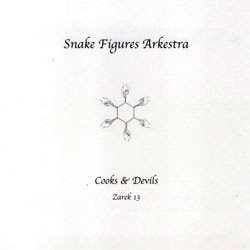 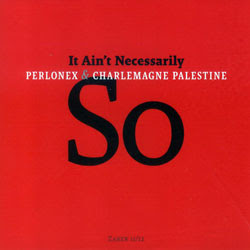 Whoo boy. I suppose I could simply opine that the sections where Palestine doesn't sing are fine, excellent really but the ones in which he does, which make up a substantial portion of the 90 or so minutes here, are anything but. Perlonex (Ignaz Schick/tube sine wave generator, looper, objects, turntable; Jorg Maria Zeger/various guitars, stomp boxes; Burkhard Beins/selected percussion, objects, small electrics) accompany Palestine (grand piano, vocals, cognac glass) in three improvisations that seem to be based very loosely around the chord changes of the Gershwin tune, even when the vocals are absent. On the first piece, the piano is played quite sparingly and works especially well with Beins' buzzing percussion. The music builds, swelling wonderfully, Palestine beginning to attack the keyboard in his patented fashion. It's very exciting and I was thinking, "Wow, this is pretty great stuff." And then.

And then, about a half hour in, ol' Charlemagne starts to sing. Remember Roswell Rudd's brief but hilarious vocal forays on Escalator Over the Hill? Well, that's what hit me first, a similarly gnarled, bluesy voice, humorous in its smallness. Humorous in another context, that is. Here...it kind of brings things to a shuddering halt. Palestine scats (if that's the appropriate term) nonsense syllables to the song's melody, sounding quite the constipated old guy. The voice wafts in and out for the remainder of the first track (all of disc one), growing more, er, strenuous, as time goes on.

The second track begins with fine solo piano of the "strumming" kind, then a rich percussive interlude before Palestine rejoins; again, a fantastic opening, some 20 minutes worth. Yes, and then the singing starts up again, this time with new lyrics. Not better ones. Rhyming "wait" with "Kuwait". That's not the worst. When he fades away, the music is brilliant, taking on an extremely harsh and sinister tone, not dissimilar in character from the 2005 Rowe/Beins set, powerful stuff. There follows a 10 minute encore which sports Palestinian babbling while also lacking in general interest otherwise.

So. I'd have to give this a very qualified thumbs up, simply because most of the instrumental material is as good as the vocals are horrendous (though, I imagine, some will quite enjoy them). But don't say I didn't warn you.

Not sure if Zarek is maintaining an active website, but these are available stateside from erstdist
Posted by Brian Olewnick at 6/08/2009 07:08:00 PM