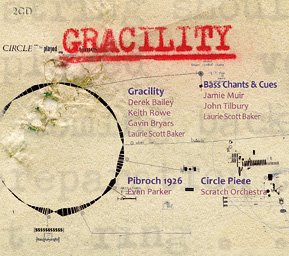 Baker's role in the experimental music world of England in the late 60s and early 70s has been scantily documented up 'til now, mostly consisting of his work with People's Liberation Music, possibly leading some to think of him as "only" a politically oriented musician. This set goes a long way toward rectifying that misconception, not that the music contained herein isn't broadly political by implication but with the arguable exception of the brief Evan Parker pieces, it isn't overtly so.

The title piece alone, recorded in 1969, is cause to sit up and perk one's ears as it's the only occasion, as far as is known, that Keith Rowe and Derek Bailey performed together, here with Gavin Bryars on bass guitar and Baker on doublebass. It's a free improv work but with an interesting constraint: the amps had their volume controls set right on the edge of feedback and the musicians' instructions were only to avoid generating any such, a hazardous line that necessarily gets crossed on occasion. At it's strongest, it's a very impressive piece; Keith mentioned to me how surprised he was at how closely portions of it approximate a "Crypt"-like level of creative violence. It's virtually impossible to tease apart the contributions here; one can rarely even pick out Bailey with any confidence. Just raw amplified strings teetering on the brink of chaos, a valuable addition to both Rowe's and Bailey's discographies and to the accounting of late 60s British music.

The pair of brief solo soprano pieces for Evan Parker, "Pibroch 1926", are also something of a unique endeavor, as close to song form as I've ever heard him play. Two beautiful folk-based tunes derived from the singing of Calum Ruadh and serving to symbolize the General Strike of 1926 (they were part of a longer work of Baker's, "Will of the People"). There's a bit of overdubbing, recalling the Poppy No-Good era Terry Riley, which leads into...

...the most surprising piece here, "Bass Chants & Cues", a 1972 performance (apparently immediately after the trio, presumably with some others, had presented Rzewski's "Coming Together") with Jamie Muir (drums, voice--just before his tenure with King Crimson), Baker (bass guitar, synthesizer) and John Tilbury (organ). Tilbury had performed works by Riley before and the minimalist's influence is in full force here, the raga-inspired organ of his all-night sessions virtually taking possession of our beloved pianist. About halfway into the 51 minute set, Baker lays down a rockish bass line amidst his tape loops, Muir starts to bash away and we get an exceedingly rare opportunity to hear the wondrous Mr. Tilbury...rock out. There are moments when he presages Miles Davis from several years hence with long, spacey chords. I have to say, it's hard not to smile if, like myself, you've only seen John in relatively recent years, imagining him in action here! Much fun.

The 2-disc set closes with a 1970 recording by the Scratch Orchestra of Baker's "Circle Piece", a graphic score that evolves into a drone-like piece that recalls similar portions of Carla Bley's roughly contemporaneous "Escalator Over the Hill" (the Desert Band). It's quite rich and full of throbbing life, almost an extended orchestral tune-up, but bubbling with ichor. A fine way to end the collection.

"Gracility" is a wonderful documentation not only of a musician whose work should be much more recognized than it is, but of several exemplary instances of the kind of music that was being produced in London in that period, all too little recorded. Mandatory listening for anyone at all interested in the goings on then and there.

Thanks for the review on this one Brian, its one I've been anticipating. I should have it pretty soon and your review just got me more excited for it. My appetite for this stuff was just further whetted from the Forty Years from Scratch broadcast in which some of the pieces from this disc were played. Looking forward to hearing this.