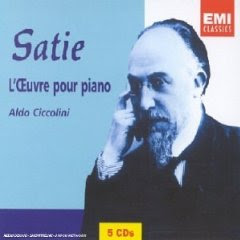 Driving to and from Saratoga this weekend, for Tiana's graduation from Skidmore, I played through this 5-disc set, something I should do more often (the playing through, not necessarily the driving). I don't think I've written about this here before, in any depth.

My first exposure to Satie (if you don't count the opening track from the first Blood, Sweat & Tears album!) came in the art studio at Vassar in 1973, where Lewis Rubenstein (not a very good painter or teacher but a very sweet fellow) used it as ambient music during classes. I'm sure my first reaction was, "Hey, that BS&T music!" but I quickly fell under its spell. He played the recordings by Aldo Ciccolini, which had fairly recently been issued on Angel in six volumes. As ever, it's difficult to parse out whether my attraction to Ciccolini's interpretations are more or less objective or if it's tethered to the impact occasioned by initial hearing but, however it sorts out, I've never come across another pianist's Satie that effects me nearly as much. He tends to take things slowly, even languorously, which strikes me as exactly the correct approach. More, as Tilbury with Feldman, he has an exquisite sense of both touch and pacing, varying the dynamics with great subtlety and sensitivity while also, very often, not falling into a strict tempo, pausing and then tumbling, a wonderful cadence as natural as a stone rolling down a gentle hillside.

I'd pick up recordings by others but, almost inevitably, I'd find them too rushed or clipped. Something like the 4th Nocturne (still, gun to head, my favorite individual piece of music, as played by Ciccolini) utterly dies when pushed along too rapidly. I'm told, and have been meaning to hear forever, that Rienbert de Leeuw takes things even more glacially; need to hear that finally.

In any case, listening through the set, one is consistently astonished at how great virtually everything sounds, how modern, how moving, how humorous. The more static later work, things that gave me some trouble early on like the Ogives, I can now hear through a Feldman/Cage lens. I'm not sure there's a piece that doesn't have some fascinating aspect, often a beautiful one.

Just thought I'd blurt. If there are any readers who have yet to deal with Satie or, if they have, haven't heard the Ciccolini renditions, behoove yourselves forthwith.

btw, read Paul Auster's "Man in the Dark" over the weekend and enjoyed it greatly even as it hearkens back, obliquely, to John Gardner's "October Light".

Those looking for a Satie-related chuckle could do worse than searching YouTube for "John Cale" and "secret"...

:-) More eager than ever to hear him.

And compared to Ulrich Gumpert's recordings of Satie even Reinbert de Leeuw is rushing. But the 3-disc set by de Leeuw from 1977 is still the Holy Grail.

I like the de Leeuw set very much. Moments we're used to hearing as trills, ornaments or transitions suddenly become their own melodies.

But the Alan Marks recording of Vexations is slower, and heavier than de Leeuw's.

The 3 CD set by France Clidat is the other standout for me, she's the only one who can occasionally work in rapid playing & flourishes and have it really work.

But I always, always keep coming back to Ciccolini. I can't even say why, there's just no contest.

Thanks, Milton. I think I'll write about it again later, but yesterday, I relistened to the de Leeuw set in the car and your remark about trills etc. morphing into their own melodies was very much in my head. You really have to recalibrate your mind a bit (especially if, like mine, it's occupied by Ciccolini). There were many moments when those "flourishes" changed into small, distant, individual explosions, very beautiful.

Hi Brian, many thanks for the pointer to the nocturnes, fun pieces that are very different from the more famous gymnopédies.

Hey, Caleb, happy to be of service!