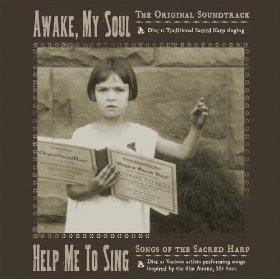 I mentioned a few weeks back that, at Record Club, Nina played a selection from this album. She lent it to me yesterday.

Holy crap! Amazing stuff, scaring and thrilling this atheist soul simultaneously. Congregational choirs from Alabama and Georgia, recorded in 2005-2006. My understanding (I could well be wrong) is that these aren't "choirs", just reg'lar folk, divided into four sections with a "conductor" for each and the hymns divided into parts, more or less soprano, alto, tenor, bass. Each one begins with a weird kind of solfege, as though to allow the group to find its tonal center and cadence, then they launch into the hymn proper. The untrained aspect seems to lend a rough-hewn, quavering quality that's quite stirring.

Anyway, thought I'd mention it here on the long shot that a reader might know more about the area. Just what I need, another sub-genre to investigate.

Hey Brian,
I don't know a lot about this area, but 2 albums I like a lot are the Dust-To-Digital comp 'I Belong To This Band' and the Alan Lomax collection 'Harp of 1000 Strings' on Rounder, both definitely worth your while.
Cheers,
David

Back in the day,at "camp meetings" in SC,we just called it singing,and it was very informal.Anyone could take their turn in the center,and lead the others;performers and audience,one and the same.

Compelled(not by Christ:)by your post to search;this seems to have evolved into something much grander than what I was exposed to,but great to hear this music(best part of religion)being kept alive...

sacred harp singing is a subset of shape note singing, so called because of the easy-to-read shapes rather than notes on a clef in the hymnal. music training isn't necessary at all, and many of the sacred heart ensembles apparently happily involve walk-ins.

it's called sacred harp singing after the most popular of those shape note hymnals.

anyway dust to digital is the right place to look. they actually arranged for the cd you're writing about, though they released it under a different label name to indicate the involvement of the directors. is my understanding, anyway.

idumae 47b (and am i born to die) is one of the most beautiful songs i've ever heard.

Thanks, all. Looked around a bit in J&R yesterday (in the course of buying de Leeuw's Satie and Ethiopiques Vol. 1) and couldn't locate this or any related discs. They have a reasonably extensive Gospel section, where I imagine this would be filed, but no luck; could be elsewhere, though the employee I asked hadn't heard of it or the like.

btw, another thing I meant to look for but forgot about, which Nina had also previously brought to RC was the Tahitian Choir. More amazingly odd and powerful choral music.

Disc 1 is fantastic! Found it here: