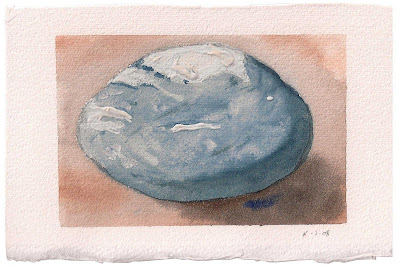 Allow me to indulge in a rare bit of self---well, not promotion, but just displaying my wares. Every so often, I get asked about my own paintings and, until now, have successfully demurred, if only via the simple expediency of not possessing a scanner. I also hadn't painted since about 2003, choosing to spend my limited spare time writing. Too, I'd (long since, I think) reached a point in my work that I was satisfied with; I thought I'd taught myself to see well enough that producing a painting seemed unnecessarily duplicative; I'm not sure, today, that that's not still a valid point. But recently two things changed. One, I re-met my dear friend Betsy Wallin, who I'd last seen at Vassar in 1976 and she, via prodding, encouragement and the occasional harangue, convinced me to pick up the brushes again. And two, she has a scanner.

So, about a month ago, I made my way into Pearl Paints for the first time in quite a while, purchased several sheets of 300 lb Fabriano watercolor paper, a couple dozen tubes of paint (my brushes were still in good shape) and set to work.

I'd actually had it in my head for a few years that a painting of one of the massive stone blocks that comprise the abandoned train embankment across the street could be quite wonderful. I still think it might be though you couldn't tell from the evidence provided by my initial attempt. Simply put, I bit off more than I could chew, especially in watercolor. It's sitting here (happily, too large to be scanned) awaiting final judgment; I may return to it in brutal fashion as the basic structure is ok and might bear some messing around. But I realized I should probably revert to the small format to which I had been accustomed. I'd given away a few of the (imho) better pieces to friends in recent years, but I still have a few around. I anticipate the surprised response, "Olewnick, wtf?! Here you're writing about all this abstract, noisy, hyper-modern music and you paint like my grandma!" Well, I paints 'em as I sees 'em, always have. The odd abstract work appears--I did one yesterday afternoon in fact, as yet unscanned--but generally speaking, I place an object or two or three in front of me, something that carries personal meaning, and approach it as honestly as I can. I've said in the past that, were I a musician, I'd have likely produced music not so different from Howard Skempton. Here are three older pieces I like for one reason or another, 1996, 2002, and 2001. 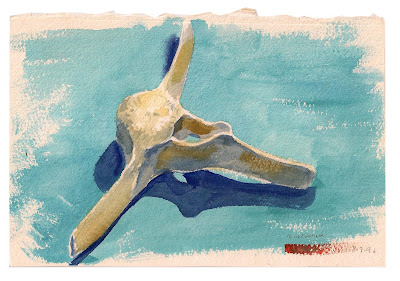 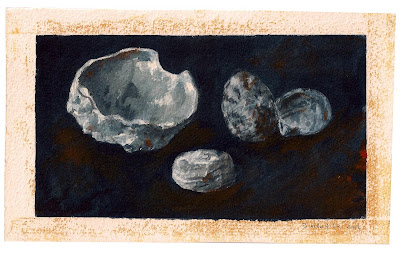 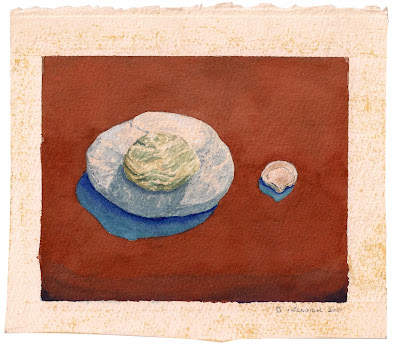 The last, I'm pleased to say, is in Betsy's collection.

So, scope downsized, I cast about for objects. A couple years ago, when I visited my cousin Jana in the Methow Valley, Washington, I fetched a stone from a stream bed and had kept it alongside my pc since--a logical enough candidate. 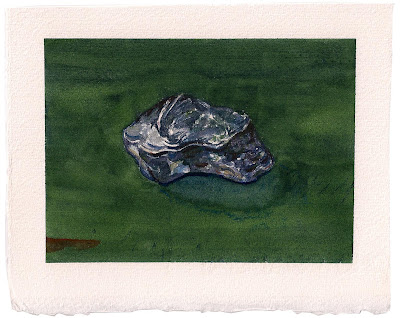 As it is black with white striations, it was a bit of a challenge insofar as investing it with some life (drawing it better would have helped) and it reached a fairly miserable condition, enough that I loosened the reins, as it were, and brutalized it somewhat, managing to bring it to an acceptable point. Maybe.

I was a little hesitant about going back to rocks, sticks and such, for a long time my favorite subject matter (that hesitancy wouldn't last long), so I turned my head left toward a plant that sits between me and the window, and limned this one: 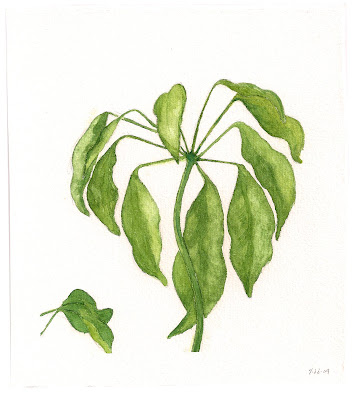 Thought it was kind of ok (I was still at the point of questioning whether or not it made sense to resume painting at all); the small intruder in the lower left I thought of as a nod of appreciation toward Keith, an element that may or may not have appeared a decade ago.

Betsy and I had been talking about my longstanding approach, mostly in drawings, of simply turning and working on whatever happened to be in front of me, extracting interesting compositional, textural elements from what was there (I suppose I should say that this vastly predates any knowledge on my part of field recordings, Cage, etc., fwiw) and I think she said something about clothes thrown over a chair, so I shifted my gaze rightward to my shorts draped over a wood-frame chair I've had since childhood and ended up with this oddball, largely unsuccessful thing (I'm posting 'em all, good and not-so): 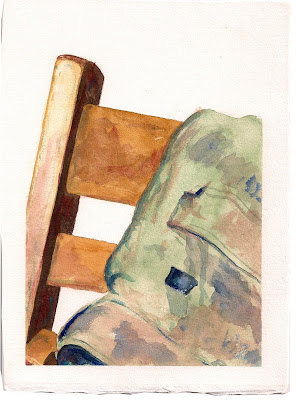 This was becoming a tad frustrating, so I decided to go back to an old favorite, the largish rock that appears in the third of the three older paintings above, put it on a surface and paint it. Did so four times, the third of which is at the top of this post. That one, and its successor, I think work very well, were an awful lot of fun to do and are different enough from my earlier painting to give me some urge to do more. 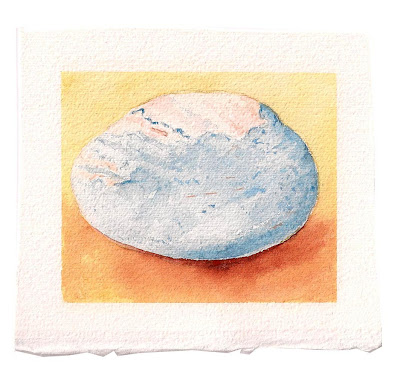 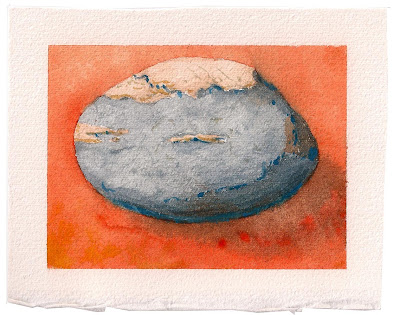 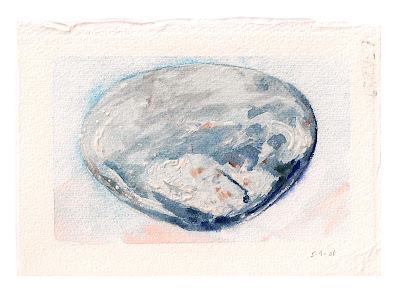 There you have it. Did a couple more yesterday, perhaps I'll post these periodically.

Huge thanks to Betsy, who's been a deep source of inspiration and an incredible friend these past few months (after a gap of a mere 32 years). And equally huge thanks to Carol Pavitt who for the past seven years (after only a 30 year hiatus!) has been extraordinarily important to me in all ways, including all things aesthetic. Thanks, guys.
Posted by Brian Olewnick at 5/23/2009 07:39:00 PM

Very nice work, Brian. The goad Betsy has provided following a long distance is cool too.
I like the idea paint what's in front of you. No distinction between ordinary and extraordinary subjects.

Thanks very much for sharing this Brian, very welcome.

Reading your words I am for some reason reminded of something my (sadly departed) old secondary school art teacher said to me more than once, (usually when drunk);

"before you decide to polish a shoe, shouldn't you always check that you are going to be wearing it?...

...and then before you worry about being able to see your face in it make sure you know which foot it belongs on"

Ollie you're such a mensch

I like 'em. Like Jesse, I appreciate the idea of simply looking around the room and painting what's at hand.

This is really cool, Brian!

Very nice, Brian. Everyone has some lingering attachment to simple beauty, and it's fun to see how it variously comes out.

Yes, quite beautiful! Thanks for sharing them.