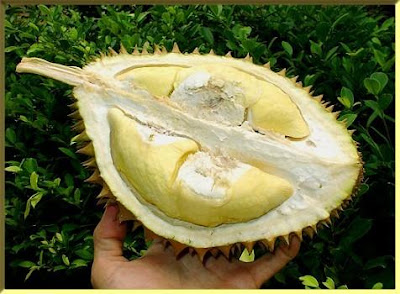 Let us now pause for a rare food post.

I'd had durian once before in my life, maybe seven years ago shortly after we moved to Jersey City. There was (unfortunately since replaced with a Target) a huge international foods store with six or seven ethnicities represented, including Indian, Filipino, Chinese and Japanese. I remember vainly trying to convince Linda to buy the bull pizzle, a coiled thing that I'm sure stretched out a good two feet unfurled, to no avail. In any event, one day I bought a durian.

It was a bit disappointing. It also, though no olfactory paradise, wasn't the stinkfest I'd been expecting, smelling only mildly foul (Those readers more familiar with the old Dafeldecker label than the fruit can remedy that situation here) However, the taste was kind of bland. I could get the sense of how a good sample was likely to taste, but it was a faraway glimmer.

Recently, however, I learned that durian was being served, scooped out of its rind, in Chinatown at the corner of Grand and Bowery. Glen, a co-worker who lives near there, brought in a container today.

Durian does well when kept in a freezer, never actually becoming frozen, but acquiring the texture of frozen custard (it has a custardy texture anyway). You can slice off clean hunks of it, carving around the sizable seeds. Its taste has something of papaya to it but also a kind of tang that's unique, possibly off-putting to some. But if you can get past that, and the smell of the fruit (which can range from not bad at all, like today's sample, to utterly offensive), it's positively ambrosial. Even better than Marmite.

my first response to that picture was to reach for the bug spray. Sounds interesting AND yummy!

I'd love to work wherever it is you work Brian, seems like every day is one big show and tell session!

I'm wondering how many more "Food of the years" there will be before we are halfway through 2009 ;)

I admit to being somewhat worried that Erstwhile will get into the exotic fruit market.

hahaha, I think you're safe there.

here's my newly discovered food of the year so far:

i've enjoyed its cousin, jackfruit, several times, but have never had durian. chilling in the freezer first sounds like the way to go!

Jackfruit (known in the Philippines as langka) is great. Slimy but great. If you get a chance to try turon, sweet wrapped plantain with langka, fried in an "eggroll", go for it.

Bought the durian available in a Vietnamese place here in Jersey City on Friday. Very delicious, a little smellier than my previous example. I didn't think it so bad, but it sent Linda from the room, complaining bitterly and lighting scented candles.

Hey Mike. Heidi pointed me to that store. I'd been to the restaurant several times but had never ventured into the adjacent grocery. Those weekend mornings sound very tempting...

You should definitely rectify your durian situation, though.

I recommend the bags of little hot peppers from that store, great for stir-fries.