Two minidiscs of solo work, not entirely dissimilar despite the difference in instrumentation, both dealing with sustained sounds integrating the pure with the...less pure. Vorfeld uses electric lights (and glitches thereof), blended with stringed instruments of his own design. The sounds themselves are lovely, the structure somewhat more diffuse than I found myself wanting. It was designed in conjunction with some graphic work and might well benefit being heard in tandem. Halliwell's feedback saxophone, heard here in work culled from 2003-05, gracefully intertwines strands of tone in lovely braids and then...well then, damage appeared on my disc (yes, I was momentarily unsure if it was intended or not, an occupational hazard in these fields). Through the glitch storm, I could make out the continued pattern for the last few minutes and it's quite attractive. 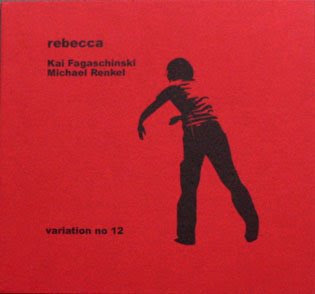 [Apologies for the range of images sizes; I'm going with the largest and/or clearest I can locate]

Kai Fagaschinski (clarinet) and Michael Renkel (guitar, zither) comprise Rebecca, here offering a 1/2 hour + performance from 2005. It's one of those welcome pieces that works as a whole rather than in an episodic fashion, meaning the listener has to "stand back" a bit, but the result is all the more satisfying when you do. Even so, there's a section about midway through that stands out for sheer sonic gorgeousness. Good fluctuation in approach, held my interest throughout. Fine stuff, recommended. 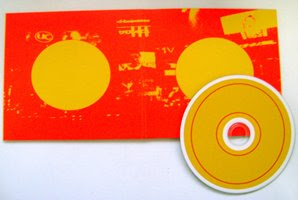 (btw, there is still no better name, anywhere, than Utah Kawasaki)

From 2006, each credited with guitar, electronics and microphones. It's a tougher row to hoe than the Rebecca, full of insectile skitters that occasionally rise to the level of ear-rending shrieks, in some ways a fine (if unintentional) compliment to Rebecca, an acid bath after relative luxuriousness. The term cricketacious springs to mind. The ebb and flow of the form is more eai-traditional, washes and chitters blanketing one another steadily, with a few jolts tossed in. Good recording, though not as "whole" as the Rebecca, my personal favorite of this latest passel of Esquilalia.

"my personal favorite of this latest passel of Esquilalia."

Surprised to hear you describe the Kawasaki/Korber as more eai-traditional Brian. For me the most interesting thing about that release is its unusual structure. I'm not certain yet how it was put together but will be reviewing it so will find out soon.

I quite like that Kawasaki/Korber as well, one of the more interesting things I've heard this year. But (and this is the first I've seen anyone talk about this) I also felt like a lot of it was familiar. To me it seem almost as if it was using a number of sounds or techniques that I have heard elsewhere, almost like an homage. But the shifting between these was pretty different I thought, so it felt somewhat old school to me, but almost like a tribute, or commentary upon older pieces.

Hmmm I'm baffled. To me the disc sounds completely unordered, as if someone took an everyday improv piece, cut it up into bits and put it back together in random order. I need to listen some more and speak to Tomas but Im lost as to why I'm the only one to think this way!

Thanks Brian for your reviews.

Regarding Graham Halliwell's On the Sensation of Tone - there should be no glitches throughout (especially not a glitch stom). I can only assume your disc is damaged.

As for the Korber / Kawasaki - well, I agree with Richard...I find it very non eai-traditional both in terms of structure, sounds chosen and how everything is mixed. Though knowing how it was made I have to disagree with Richard regarding the fact that is sounds like it was put together randomly - I'm sure you will find out soon from Tomas.