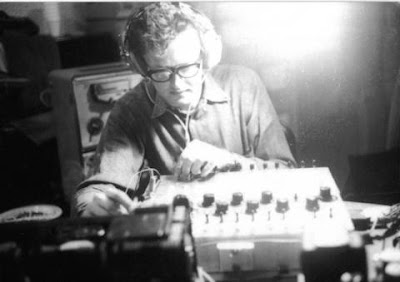 I just heard that Max Neuhaus has died.

Shortly after I moved to NYC in '76, I somehow heard of Neuhaus' installation on one of the traffic islands in Time Square. Rather, below one of the gratings where he'd placed a sound generator that emitted a non-stop, low level throbbing drone. I spent many an hour there, listening to the drone mix with the hubbub, watching the bemused looks on tourists trying to figure out what the hell was going on. Any time I was in the area in the ensuing years while it was active (it was disconnected between 1992-2002), I'd make sure to stop by.

I should have followed up on this way back when but didn't. I read of other works of his from around the same period like music broadcast in a swimming pool where, in order to hear it, one had to dive in. (I believe this is a photo from the event: 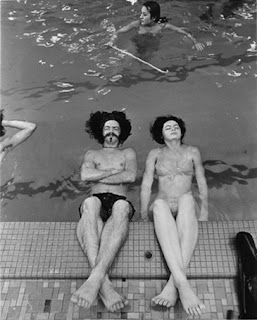 There was another, I think around Buffalo NY, where his work was aired on a faint, unused radio channel. You were to get in your car and tune in to the station. As you drove around the perimeter of the city, the sound would change, fade in and out, etc. Wonderful idea.

Most recently, and quite by surprise, I encountered his music at the Dia Center in Beacon where, if I'm not mistaken, a piece is installed on the roof, out of view. I was sitting outside on a bench with Keith a couple years back, not entirely sure if I was hearing echoes of trains or auto traffic or if the sounds were otherwise created. A little investigating led to realizing there was a Neuhaus piece in the vicinity, though hidden. Very lovely.

Thanks for all the marvelous ideas and music, Mr. Neuhaus.

Over at IHM, Robert posted the cover image from Newhaus' record on Sony:


I recognized the image instantly though I don't own it and never did. Thinking about it, I realized I must have borrowed it from Adriance Library in Poughkeepsie around 1971-72 (All Music Guide lists the record as 1965--is this accurate? I would've thought later). It's a bit disgruntling, looking over the pieces, to realize I'd actually heard Feldman and Brown without having a clue who they were. I knew, vaguely, Cage and Stockhausen, having borrowed a 2-disc set of the former's "Atlas Eclipticalis" (entirely over my head) and the latter's Microphonie II (on Angel?), which I liked.

Got a lot of early exposure to things from that Library, even though its jazz and 20th century classical stock was pretty small, probably less than 100 LPs. Heard Dolphy there, "The Amazing Bud Powell", Honneger ("Pacific 235"), Scriabin, Prokofiev, Herbie Hancock, Barber ("Vanessa", something I should listen to again), others.
Posted by Brian Olewnick at 2/04/2009 01:15:00 PM

That Sony International album is still available Brian though you might have to search for it a bit. Its very strong though I prefer the Nine Realizations of the New York School disc on Algha Marghen.

I've only ever heard Neuhaus on CD. If any of his installation work ever made it to the UK while I've been aware of him then I missed it.

For me he had an incredible sensuality to his playing not often noticed in realisations of this area of music. RIP

The Sony album is also available at Ubuweb in 192 kbps.

You could also check lots of overhead music at various music stores and websites.