As I mentioned on Richard's blog, I wasn't at all sure at first whether or not the pervasive, fuzzy kind of hum one hears was triggered or, as he pointed out, the result of upping the volume on the room ambiance. Subsequent listening convinced me of the latter. Well, it's nice that when you title a release, "in a room", the room in question has an approximately equal say in things as the two humans, which it does, along with some activity outside the venue. In any case, a delightful recording, Kahn and Naoshima, often retreating entirely, elsewhere erupting in swirls of rubbed and tapped percussion and mixing board, though the latter is tougher to pinpoint apart from some ultrahigh skirling. Very enjoyable, rich recording that fits right in with my room very comfortably. 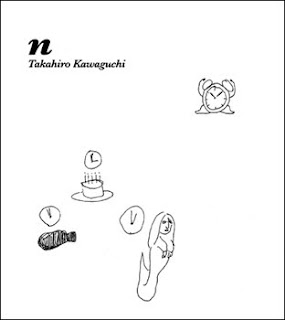 Kawaguchi's credited with "remodeled counters" here. Not sure what those are except that they apparently tick. I suspect there's no overdubbing but rather simply a whole lot of counters, set to tick in (necessarily, one would think) non-unison. At its best, you hear the kind of phasing effect, rather like early Reich, which is fun enough if not so gripping these days. To my ears, the pieces would work far better as an installation one could walk through (and that might well be the source of these recordings, dunno), where the spatial aspect would lend a wavelike feel. As is, it's pleasant enough, not uninteresting, but not so convincing. 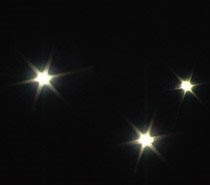 A 22-minute DVD with music. The visuals consist of seven lights set in a pattern against a black background that, intentionally I take it, causes one to think: constellation. The lights are actually filmed, if I'm not mistaken; you can occasionally just about glimpse some background near the one on the upper right. The camera lens causes them to gleam snowflake-like, with six points emerging as well as faint vertical artifacts. They're motionless throughout, brightening and dimming more or less in unison (though with some subtle fluctuation. During the first half and more of the piece, their change in luminosity seems to be triggered by the music which, at this point, is made up of calmly strummed and sustained guitar, tonal in character but free of melody or explicit rhythm. There's a certain charming naivete about this, as though the lights are alien creatures mimicking the noises you're creating as best they can. The music shifts a bit after midway through, becoming more abstract, higher-pitched and grainier, sounding in the no-input mixing board area and the relationship between it and amplitude changes on the part of the lights becomes less clear, though more interesting. It's an odd work in many ways--not as spacey as one might expect, seemingly open and accessible but not really giving you much in the way of easy footholds, a good thing. Worth checking out.

I've heard of but don't recall ever actually hearing the Ligeti. Could well be.

The phasing aspect in Reich and others would have two or more sound generators in some regular rhythm, very closely--but not exactly synced. Your ear hears them in unison for a while until the difference in their tempi widens enough that you're forced to separate them into two rhythms. The interesting thing, for me, is that you have these instruments or machines doing "nothing" differently on their own, but as listener, you ascribe set rhythms to them based on their interactions, which are fluid in reality. That insistence on sensing pattern and trying to fix it, to nail it down.