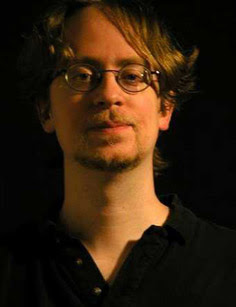 While in Philly for Keith's show last month, I had the pleasure of meeting Matt Mitchell for the second time. Matt released a very fine disc on Scrapple this past spring, the inscrutably titled, "vapor squint, antique chromatic". Oddly, he doesn't really resemble the photo above anymore, more like a combination of that and this one:

Matt was kind enough to donate five more discs (a couple as yet unreleased) to the infinitely expanding Olewnick music library and brief comments appear below. Thanks, Matt! I've mentioned before, but the Philadelphia eai scene is one of the strongest in the US as best as I can determine and more people should give these fellows a shot.

Kaktus is a trio with Lars Halle (percussion), Aaron Meicht (trumpet) and Mitchell (piano, inside piano, objects). If this disc is representative (they have a few others I’ve not heard), the trio abides in quiet, delicate territory, fairly abstract but with occasional forays into dreamy jazz-tinged areas, usually courtesy Mitchell’s piano. Twelve rather brief cuts here, Meicht evoking “small sounds” on his horn, Halle something of a colorist, always soft and subtle, Mitchell often softer than that, sometimes sounding Tilbury-ish. They keep things on low simmer throughout, admirably and sensitively contributing only as little as necessary. Nice recording.

Flounder
Propped Fulgurations
(not yet released)

“Flounder” (Mitchell & Brendan Dougherty on percussion) is quite different, much more in the tape collage category. Mitchell took recordings of the duo from 2001 and re-processed them in 2005, creating a rough, bumpy, hyper-real noise-scape. There’s a great variety of textures and densities, even of apparent “distances” between the listener and the sounds. Mitchell drags in detritus from every conceivable corner but the piece never feels weighted down or overstuffed. Brief repetitive episodes, loopy moog-like tones, needle-sharp crackles and clam hisses all gambol playfully in the general tumult. My interest never flagged a bit over its 20 minutes. Hopefully this sees proper release one of these days—look out for it.

Admittedly, the name of this trio made me revisit the above and think of it as, “One who flounds.” Dougherty, Meicht and Mitchell on hand here, in a June 2004 performance and damn if it’s not another good one. It kind of crept up on me, starting off a bit too tentative and haphazard but become very much more solid and engrossing almost before I realized it. Although it also covers a good deal of ground, the music tend toward soft industrial drones, the contributions of the three musicians often beginning disparately then subtly entwining into one complex sound. It loses a bit of steam toward the end of the single 48-minute piece, descending into a small jungle of flutes, percussion and calliope-like tones for longer than necessary, but still, a fine effort.

The last two in this bunch are sets with Dougherty and Meicht. This one is much more in the “traditional” (that is to say, post-AACM”) vein of improvisation. In fact, it might even be heard as something of an homage to Lester Bowie, so strongly is his sound evoked. Dougherty might not be so close to a looser Philip Wilson but isn’t so far away that the thought doesn’t cross your mind. The disc contains six studio tracks, about a half hour, and then a single set of the same length, live at ABC No Rio. The latter is a bit less derivative overall but still didn’t do so much for me.

AB Duo
…Too Much for a Pogie
(unreleased CDR)

This recording, created only a few months ago, is entirely different, marked largely by a wide use of electronics but also a large variation in approach, sounding like some bastard child of Bill Dixon and….I don’t know, Jon Hassell? “Sextant”-era Hancock? It seems that, for the most part, both percussion and trumpet are processed on their way to the disc and also, one gathers, chopped up and recomposed later on. There’s a dreamlike quality, but one of those rude, off-kilter dreams, the kind that bother you later the next day. It’s an engaging effort, only 30 minutes long (don’t know when/if it’s released, whether more will be added) and points in a more interesting direction than the earlier disc.
Posted by Brian Olewnick at 11/24/2007 09:23:00 AM