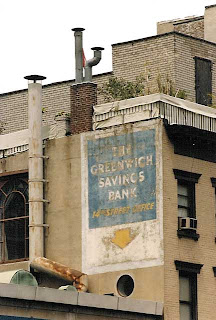 I finished reading Morton Feldman's "Give My Regards to 8th St." this afternoon which, shockingly, I'd never gotten around to before (thanks for the book, Jon!). Of course, I'd read numerous excerpts and stories from it over the years. My favorite had always been the following:

I was having a conversation with my teacher, I wasn't studying at the time. His name was, a fabulous guy by the name of Stefan Wolpe. And Stefan came out of a 1920 Weimar Republic. He was Marxist and he had a studio on at that time, more so now, one of the more proletariat streets in New York. It was on 14th Street and 6th Avenue. And I brought him a new piece. I wasn't studying with him but I was still seeing him, bringing him my music. I brought him a new piece and he says, "Morton" he says, "it's so esoteric, you're so esoteric. Isn't there such a thing as the man in the street?" He was on the second floor. And we're looking down and who's walking across 14th Street and 6th Avenue - Jackson Pollock.

I didn't know for sure that this story was in the book at hand (the above quote is actually the same story from another lecture, I think) but figured it was. It's toward the end of the book and I arrived at it while waiting for Linda to meet her for a movie and dinner as I was leaning against the side of a building at 14th St. and 6th Ave.
Posted by Brian Olewnick at 11/09/2007 10:12:00 PM

That anecdote is recounted in Alex Ross' 2006 New Yorker profile of Feldman. Absolutely pith, like alot of his off the cuff remarks.
That book is on my short list.

I only picked this up a year or two back myself. thing is, when you finally read it you suddenly realise you are familiar with the majority of it already, such is Feldman's quotability... Nice to have it all in one place though.

lolabelle you're in Scotland am I right? As daft as it may sound, it would probably have been quicker and cheaper to have had ordered the book from ErstDist given the ridiculous exchange rate right now and Jon's speedy delivery. (he really has nothing better to do than put things in envelopes and take them to the Post Office ;)

A favourite quote of mine that often makes me wonder:

"Until ten years ago I wrote a lot about music. I no longer do. The writing was usually polemical in context. In recent years I do not want to argue with talent. I want to be thankful for it regardless from where it comes"

Ah well, the wait will make me appreciate it all the more when if finally does arrive.

Richard, do you ever venture north for some culture? hehe

As little as I can lola, but yeah on occasion ;)

I've been to shows in Aberdeen and Stirling over the last 18 months or so, and a little birdie tells me that Malfatti, Werder and Beuger will be playing a Wandelweiser night at Kill Your Timid Notion in Glasgow in February. Nobody could stop me being at that one!