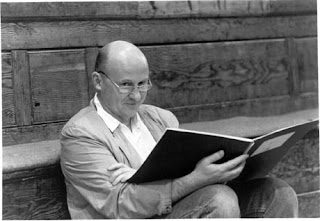 I'm going to see a performance of several Gavin Bryars pieces on Thursday at Roulette as part of the annual Interpretations series. It will only be the second time I've seen his music performed live.

I can clearly remember the first time I ever heard a piece of his, around 1980. I was sitting in our car (a yellow, 1979 Corolla) on 5th Ave and 98th St., waiting to pick up Linda from work. It was late afternoon and I was listening to WKCR's afternoon music program, hosted at the time by Gregory Sandow who was then also the contemporary classical critic for the Village Voice. He said, "All the time, my skeptical friends ask me, 'What modern piece compares with Beethoven?' and I usually play them this." Whereupon he proceeded to spin Bryars' "Jesus' Blood Never Failed Me Yet." I was entranced. Here was something that was essentially a process piece yet conveyed a huge emotional impact (and on the most anti-religious of listeners, no less). I picked it up at the Soho Music Gallery and recall having a little discussion there about Bryars and others with Zorn, who was an employee at the time. I think that's the only time I've ever spoken to him.

I was pretty well smitten with the LP, the Obscure release that paired "Jesus' Blood" with "The Sinking of the Titanic". There wasn't much other Bryars around in those days, though I snagged the other Obscure album, the one with his lovely "1,2, 1-2-3-4", which record was also my initial exposure to Christopher Hobbs. Fairly soon thereafter, I found what's still a small favorite, his "Hommages" issued by Les Disques du Crepuscule, four gorgeous works for piano, vibraphone (celesta?) and percussion--not sure if it's currently available on disc.

Around 1982, I went up to City College to attend an open rehearsal of his opera, "Medea", staged by Robert Wilson. The score was only performed on piano (with singers), but it was quite beautiful. Ah--just checked and here's Bryars on that very show:

Acts 1 and 2, plus Act 4 scene C (written in New York) and Act 5 scene C (the ending) were performed, with two piano accompaniment at the end of February 1982 following rehearsals at City College, New York with a mixture of students, semi-professional singers and singers, notably Wilhelmina Fernandez, who was originally cast as Medea.

I get the idea that a recording has never been issued?

Well, as we all know, soon thereafter Bryars signed with ECM and a slow downward spiral commenced. Things began well enough with "Three Viennese Dancers" and, at the time, I enjoyed a few of the subsequent works though I think I'd have trouble with them today. I doggedly stuck with him for a while (the lousy Point remakes of the two Obscure classics severely testing me, that utterly needless Tom Waits appearance.) There was one highlight: a brilliant version of "Titanic" on Les Disques du Crepuscule from 1990, a rendition I think is even better than the original. [Wow! just checking again, I discover that the "Hommages" album is due out on disc next week! Also, the LP had no personnel info and here I find out that John White and Dave Smith were among the players! Here's the promo:

Newly remastered CD edition of the lost yet influential album by acclaimed modern British composer Gavin Bryars. Originally released in November 1981 on Les Disques du Crepuscule, Hommages was recorded in Leicester in February 1981 and produced by noted Belgian composer Wim Mertens. The album was conceived as a series of diverse homages to other composers, which include Bill Evans (My First Homage), Ferruccio Busoni and Gustav Holst (The English Mail-Coach and The Vespertine Park) and Percy Grainger (Hi-Tremolo).

Featured musicians included Andrew Bilham, Ronald Reah, Andrew Renshaw, Nigel Shipway, Dave Smith, John White and Marie Wilson, as well as Gavin Bryars himself on piano and vibraphone. The album is the only one which documents the important period between Bryars' early experimental music and later works from Medea onwards, as well as his enthusiasm for small composer/performer ensembles.

This new 63 minute digital remaster of Hommages includes two bonus tracks composed and recorded by Bryars during the same period: Danse Dieppoise, and the lengthy piano piece Out Of Zaleski's Gazebo. The booklet features extensive notes by Gavin Bryars on the origin and performance of all six pieces, and preserves the original album cover artwork by Marc Borgers.
DUE OUT: NOVEMBER 12 2007.]


Anyway, I think I finally gave up after "A Man in a Room Gambling". Not that it was so bad--it wasn't--but his work had begun to pall. (I did like the Joseph Holbrooke disc from around '98, though).

What's being performed on Thursday, however, are four early works including the aforementioned "1,2 1-2-3-4" as well as "Pre-Medieval Metrics" (1970), "Made in Hong Kong" (1970) and "The Squirrel and the Rickety Rackety Bridge" (1971), all of which are being issued by Mode Records on a disc called "The Marvelous Aphorisms of Gavin Bryars". Actually, I'm not sure if all of those are scheduled...

We shall see, but I'm looking forward to it.

Also on the bill is a solo piano work by Maria de Alvear, a Spanish composer with whom I'm unfamiliar. I'm kind of guessing the sound will be something like a minimalist-influenced Rzewski, but I could be totally wrong.
Posted by Brian Olewnick at 11/05/2007 06:24:00 PM

I have to say I never got all the adulation for Jesus' Blood... - it just seems melodramatic, syrupy and tritely melancholy to me. To each their own of course and I have no history with it having only heard it for the first time in the last year. Still curious to hear how this show goes, though I just don't think Bryars is my flask of whisky.

I can see that reaction and, who knows, if I heard it for the first time recently, perhaps my take would be different. It is unabashedly romantic in a way, though a few characteristics supply it with enough grit for me. The old man's voice, for one, being only slightly out of tune, tinged with alcohol and smoke but also clearly (at least to me) heartfelt. The way the loop doesn't quite resolve rhythmically, leaving a bit of a hiccup between iterations. The equivalency of the old man and, eventually, the full orchestra. Little extras like one of Derek Bailey's very few examples of notated playing.

Plus, of course, the inevitable nostlagia factor. Nothing one can do about that.

From what I understand, this version of "1-2, 1,2,3,4" uses Beatles tunes. The original, unless I'm misremebering, had a slow jazz number that was played by a quartet in audio isolation from one another. They began in sync but soon drifted apart, lending a proto-Badalamenti feel to the piece.

Yeah I understand where you are coming from. I should clarify that I don't think it's a bad piece, I just don't think it's as good as it gets credit for. It's definitely no 20th Century Beethoven! I also appreciate those details you find it in though I think that the careworn, old drunk belting this out isn't really grit per se it actually is even more romantic. That myth of the happy hobo, the plucky orphan hearkening back to the mythologizing of the films of Frank Capra.

But maybe I'll give it another try in honor of your upcoming performance.

Hmmm...I don't read the tramp's singing as "happy hobo" or even "plucky orphan' (!). More like: old alcoholic dredging up a hymn he learned in childhood in the vain hope it'll offer some solace.

In fact, I'd guess that one's read of the voice would be crucial to enjoying the work or not; it's an antithesis of the polished orchestra but holds its own.

...which I guess is a little romantic...

Jesus' Blood was never a big favourite of mine either.To be fair (or perhaps unfair) I think its the Tom Waits reworkings that repel me mainly, a terrible mistake from all angles.

I used to love Titanic though and played it a lot for quite a few years, kind of forgotten it of late though. Last year Tilbury was involved with an updated performance of it that unfortunately I couldn't attend, might have been interesting.

Hmmm, that *is* interesting about Tilbury. I could see him playing the Hommages, actually.

This was the concert: http://www.tiny.cc/UGo6B

I've never been able to track down anyone that was there on the night or find any reviews. An intriguing mix of music.

Just wanted to say hi, I've been lurking for a while reading your blog.

I had completely forgotten about titanic, I saw it performed a number of years ago. I am away to have a wee browse on amazon.

Anyone named lolabelle is welcome on this site at all times!

Thank you for your kind welcome, I shall continue to lurk.

lolabelle, what was the context in which you saw "...Titanic"? I don't recall offhand reading how that was staged--if it included video, actors etc. and was not just played. It would seem to lend itself to a dramatic staging of some kind, though.

I've recounted this story elsewhere before, but I still have a bitter taste in my mouth from the Bang On A Can marathon from 10 or so years back which was scheduled to perform "Jesus' Blood" with the original film, a first in the States. Their 12-hour program ran long though and instead of--heaven forbid!--cutting out some of their own works, the festival organizers (composers all) decided to lop off the Bryars, the piece that was intended to cap off the day and the one thing that the vast majority of the crowd had hung around to experience.

To be honest I can't actually picture the performance. It was around 1994 and I think there was a video screen or slides being shown. I will have to give this some more thought.

Ah well, it wasn't very good at all. I'll have a review up at Bags maybe tomorrow, but...the de Alvear piece was meandering and tiresome. Fine, no reason to expect anything wonderful.

But the Bryars....I'm tempted to ascribe much of the blame to the ensemble because the one piece I know well from the original recording, "1-2, 1,2,3,4", is leagues better than what I heard last night. But each of them went on at least twice as long as they should have (for "1-2..." make that about four times) and were bland and overly clean to boot.

In better news, Steve Smith sent me the program for upcoming events at the Merce Cunningham Dance Co. which includes an even with Gordon Mumma on the 19th and a Christian Wolff concert in February!

I try to see the Merce Cunningham Dance Co whenever they come this way. I've been racking my brains to try and remember what I saw a few years ago that Merce was performing in. I think I may start a blog to list things seen, books read etc, anything written in diaries or notebooks tends to vanish and I no longer seem to have a functioning memory...

Alcohol has been mentioned several times here in relation to the tramp who sings on 'Jesus' Blood Never Failed Me Yet', but Bryars has always said the man was teetotal. Not an important point, all things considered, but . . .

As for the version involving Tom Waits, that was an abomination.

You know, now that you mention it, that does ring a bell. Thanks for the correction.