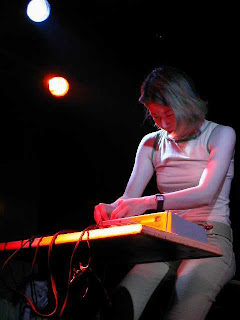 (a sigh of relief is heard from those uncomfortable with Beckman's stare...)

There aren't nearly enough good new photos of Sachiko on the Web, btw. Some nice ones that we've all seen dozens of times, but...

Her new disc on hitorri is here, Salon de Sachiko. Very different from, for example, Bar Sachiko (what is it with these titles?) in that the hour-long piece is made up entirely of small, isolated crackles. I found myself thinking of it, not pejoratively, as "fly speck music". The utter lack of dronage makes it (at least for me) very difficult to comprehend as a whole--actually something like "sight" now that I think about it. But intriguing and challenging on first listen.

Lotta severe noise and stylus abuse here. On first blush, I enjoy the rare quieter parts (including most of the last one listed and the without cartridge disc of Hong's) more than the assaultive portions.
Posted by Brian Olewnick at 11/18/2007 09:02:00 AM

"There aren't nearly enough good new photos of Sachiko on the Web, btw. Some nice ones that we've all seen dozens of times, but..."

have you seen this set that Yuko took in Houston in June?

made into a link: Houston Concert Photos

Thanks for the head's up, Brian. I look forward to hearing this one.