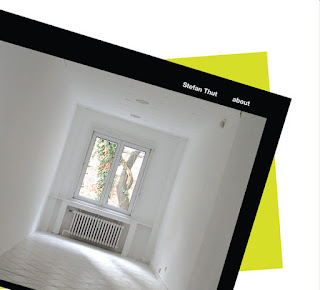 In his notes printed on the inner sleeve, Thut writes, "while being together they enjoyed leaving time and space for each other". I haven't seen the score, but I'm guessing there may have been text instructions to that effect, or at least including that kind of consideration as a means of operating. The sounds throughout the work, which lasts almost an hour, tend toward the soft and percussive, beginning with a clear, crystalline bell strike (the tingsha, perhaps) and continuing with single plucks of the cello and guitar, strikings of piano keys (fairly high in the register) and discreet electronics. More often than not, they don't overlap each other, leaving plenty of space, although the silences, while common, don't last much more than 10-15 seconds. One of the intriguing things about the music is how relatively evenly spread the sounds are--thin but always within range, as though small items had wafted down from some height but managed to arrange themselves with only the barest of overlaying, something landing in all areas but leaving much ground uncovered. Some delicate clatter emerges, now and then a woman's quiet voice, here and there, a man's.  The basic character is maintained throughout, "steady-state" in a sense, very much like observing a natural phenomenon--leaves falling comes to mind. Oddly meditative.

There's not too much more to say. 'about' is entrancing, lovingly performed. I've listened to it a number of times and will be drawn back again--a perceptive, human work.