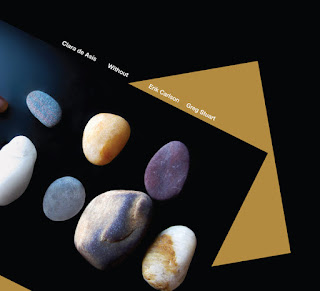 Prior to this release, I'd known de Asís as a guitarist but here she's in the role of composer. Violinist Erik Carlson and percussionist Greg Stuart offer a reading of her 'Without', a piece that strikes me as more complex and, to me, more difficult than I would have guessed at first blush.

'Without' is made up of a number of sections which, I think one could say, generally move from grainier and more abrasive to less so, though not in an obvious path and by no means always. It leaps right in with the violin offering high, needle-like harmonics with what sounds like numerous objects being roughly rubbed and tossed on a bass drum. Four minutes in, this abruptly shifts to a low vibraphone pulse; there's some other, obscure activity, probably ancillary sounds made by Stuart. Carlson enters, again pitched high but somewhat cleaner, a kind of Tony Conrad line weaving through the vibraphone cloud. This is followed by solo violin, a single note, held for about eight seconds, repeated by itself until joined by a clear, high bell, the pair heard in an irregular series with a decent amount of silence. I have the impression of an object with two main aspects being viewed from various angles, in differing light conditions. There's relatedness but a certain amount of apartness. This, for me, creates something of a challenge in hearing the piece as a whole, but it's a very enjoyable challenge, surely more an issue for these ears than anything amiss on the part of de Asís. Some 32 minutes in, there's an especially lovely sequence with vibes and lower, though still sandpapery, violin that serves as a kind of oasis after a demanding journey. This merges into isolated, low plucks on the violin, soon accompanied by clear wood block strikes, a pattern similar to that of the violin/bell sequence heard earlier. The blocks accompany a sustained violin tone very similar to that which began the work, closing it out.

Rigorous, spare, only occasionally luxuriant, 'Without' is a fine, demanding recording.