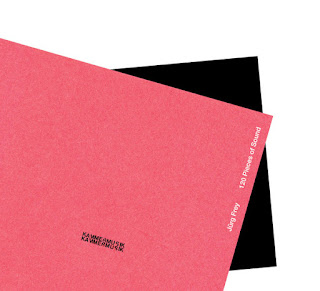 One of those recordings, an exceedingly thoughtful and beautiful one, where describing the elements isn't difficult but getting across the effect on the listener seems next to impossible.

There are two works presented here, structural cousins of each other, perhaps. The first, '60 Pieces of Sound' (2009), is performed by the ensemble Ordinary Affects (Laura Cetilla, cello; Morgan Evans-Weiler, violin; J.P.A. Falzone, keyboard; Luke Martin, electric guitar) joined by the composer on clarinet. I was fortunate enough to hear this group play this very piece in Boston about a year ago; I believe this recording was done just a few days afterward. There are indeed sixty sound elements: thirty tones played by the ensemble, each lasting about twenty seconds and thirty stretches of silence, each lasting about ten seconds, played alternately. That's it. But there's so much more. I gather, from having watched the fine, short documentary you can see about Frey (Part 1, Part 2) that the harmonies chosen were arrived at intuitively, in other words, what would sound appropriate after the one just played (and the silence). But the choices seem so right, so necessary. They inhabit a relatively narrow spectrum, but Frey discovers such a bounty of tones, relationships, subtle dynamic shifts, etc., that I simply sit in wonder. The unisons are tight but not overly so, like the ragged edge of good watercolor paper; the silences are full, often ending with indrawn breaths. I find myself constructing brief little shards of narrative between any two sound segments: a darker turn here, some hope there, a complication arising, etc. but any such turn very, very subtle. A truly living music.
For 'L'âme est sans retinu II' (1997-2000), Frey once again uses periods of sound and silence, though their durations (over the course of forty minutes) vary. The sounds are field recordings made by Frey (as well as, per the credits, some bass clarinet, though I admit to having difficulty picking it up for certain; there are points where I think I hear it, if it's pitched fairly high), the silences are complete. There's an overall fine woolliness to the sounds. Sometimes, it seems as though the source is exterior, sometimes inside, here with a super-deep, rumbling bass spine, there with wispier elements, now and then with ghostly vestiges of what might be human voices. As with the previous work, the sounds occupt a territory that's roughly consistent--one gets the sense they could be excerpts from a single evening's work (they do connote nighttime to this listener), the recordist quietly ambling from location to location. Again, the shifts are discreet: a mild lessening or increase of dynamics, a slightly different timbre, slight in envelope but infinitely large in detail. Perhaps it's from the title ('The soul is without restraint') but there is, in fact, a sense of exposure, of opening oneself up to the world, pausing to consider what's been heard/seen (the silence), opening up again. So human.

A wonderful recording, yet another in the seemingly (happily!) unending stream of such from Frey.