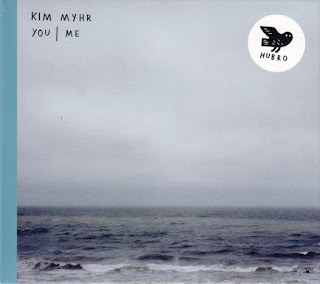 I've been aware of Myhr's music since about 2010 though, to be sure, not in its entirety, so I've little idea how much if any this recording is a departure, but it was certainly a surprise--and an exhilarating one--to me.

Performed by a quartet made up of Myhr (electric and acoustic guitars), Tony Buck (percussion), Ingar Zach (snares, percussion, electronics) and Hans Hulbækmo (hand percussion), the first track begins in a floating, nebulous zone, all dust and water droplets suspended in air,  but after about four minutes, a strummed, rhythmic guitar figures enters the scene and we get to the meat of the matter. I have to say that, inevitably, one recalls Rhys Chatham's majestic 'Guitar Trio' with the propulsive, more or less single pitch maintained throughout, accompanied by surging percussion. It's gentler than 'Guitar Trio', possessing kind of a skimming the surface quality, very attractive, like a bird flying low over the waves on the cover image. The second track (listed as simply 'A' and 'B', but hard not to think of as 'You' and 'Me', running about 18 and 20 minutes, respectively) starts right in with that lilting groove, this time with Myhr's acoustic guitar up front. The pitches used are expanded somewhat but still lie within a smallish range, but there's more going on in the bass (however generated, but including bass drum) imparting a slight Canterbury feeling. It shifts about midway through into a quavering, bell-filled area, foggy but tingling. An enjoyable and approachable release 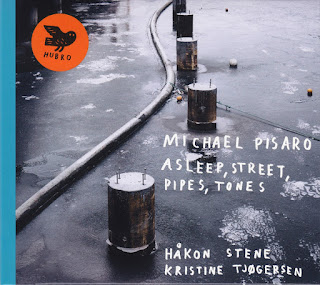 I'd heard the one other recording of this Pisaro piece, by Barry Chabala and Katie Porter (with organ and other sound samples from Eva-Maria Houben, André O. Möller and Burkhard Schlothauer), released on Gravity Wave in 2011. It's a stunning work, as is this performance by Håkon Stene (Godin and Moog electric guitars, bowed piano, field recordings) and Kristine Tjøgersen (bass clarinet and contrabass clarinet), for which Pisaro adapted the original score.

Though divided into 17 relatively brief tracks--unlike the earlier version, which was presented s a 63-minute whole--the piece is contiguous enough, with shifts on focus gliding from one to the next. Pisaro has apparently written eight "sleep" compositions, based around the idea of both continuing to hear events from the conscious world as well as developing our own during dreamtime. Here, he works with sounds from the street, "pipes" in various aspects (from waterworks to subways) and, more generally, tones consisting of musician-generated sounds as well field recordings and, I gather, radio captures. It opens immediately on a kind of white noise that has hollow, tubular overtones. It quickly fades then recurs, the iteration giving it something of the character of a steam horn. For the next hour, we traverse any number of sound fields that pierce the oneiric calm. It's pointless to try to describe them all, just to say that as varied as the elements are, even while noting standout moments like the luscious deep clarinets, the infiltration of choirs and a surprising "organ" section--pipes!--, the work flows beautifully, with its own internal dream logic. A fabulous realization and right up there with my favorite recordings of Pisaro's work.