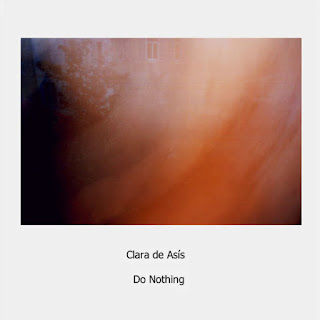 Clara de Asís - Do Nothing (Another Timbre)

This is the third release I've heard from de Asís, including 'Uno Todo Tres' (Éditions Piednu) and her collaboration with Bruno Duplant, 'L'inertie' (Marginal Frequency) and each has been a delight.

Six pieces with de Asís playing guitar and percussion, titularly organized around the idea of nothing, each with a different approach. The works are very intimate, even very precise within the parameters she's apparently assigned, like carefully limned drawings where the beauty is in the close attention to detail and where the complexity emerges from seemingly simple objects like stones and twigs. The title track offsets clear, ringing notes from the guitar, sometimes doubled, with the eventual introduction of a resonant, struck object, perhaps a bell. The two sounds, plus an alternate, slightly buzzing guitar tone, share the space, exerting a subtle gravitational pull on one another, their hanging tones causing ripples of interference. Meditative, alive, shifting and lovely. 'Know Nothing' changes locale drastically, plunging into a tiny world of skittering sounds that resemble, small sewing machines or teletypes, rapid-fire but soft, something like typewriters. There are two takes of 'Nothing Lasts', I and II. The first involves sliding, metallic objects, a kind of sound that I can listen to pretty much forever, while the second uses a similar structure but with what sounds like multiple gentle attacks on a drum head, perhaps even rain--entirely absorbing. Sandwiched between those two tracks is 'Say Nothing', repeated, deep guitar tones, regularly spaced, embedded in some amount of room tone, joined after several minutes by (guessing) bowed, large bells. It's a darker variation on the first track, the bowing fairly harsh, the guitar less glowing. The final piece, 'Be Nothing', is built around what I think is bowed metal, though maybe a guitar is in play. It begins a swirl with overtones, slightly strident, the purer tones playing off the grainier ones, then slowly subsides, damping down the volume, becoming nothing.