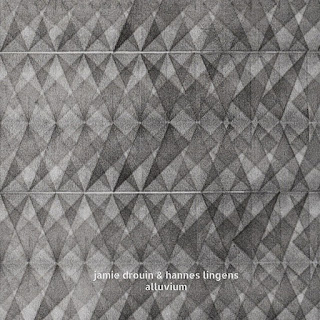 Ten tracks, ranging from under a minute to almost fifteen, from Drouin (no-input mixer, contact mic, laptop, radio) and Lingens (floor tom, snare drum, objects). The pieces, save for the longest one, are concise explorations of circumscribed sets of sounds, each one choosing a small handful of colors and making do with them. I find this an extremely satisfying approach. Even on that near-fifteen minute work, there's an episodic aspect, each portion as exacting as the remainder of the tracks. The general dynamics occupy an area between soft and mid-range, with hums, rubbed surfaces (including, I think, rubber mallets drawn across drum heads), rapid tappings and hazy sizzles featuring prominently. What more to say? It's not a sound-world that hasn't been visited before but Drouin and Lingens hear combinations and patterns unique to their own sensitivities and those sensitivities are very much in line with my own comfort zone, so I find the set ravishing and endlessly revealing of new juxtapositions and parallels on each listen. Fine, subtle, creative work. 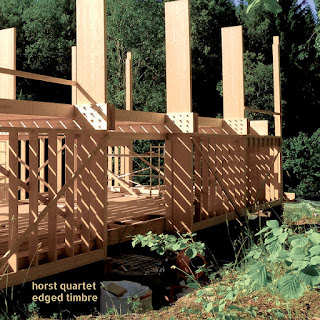 A Finnish quartet with Tuukka Haapakorpi (electronics), Lauri Hyvärinen (electric guitar, objects), Taneli Viitahuhta (alto saxophone, objects, piano) and Hermanni Yli-Tepsa (violin, objects), the group comfortably occupies the post-AMM improv tradition, creating five brief (5-6 minute) soundscapes. The music is foggy, jittery, sometimes eerie (heavy knocks on a table or something are repeated at various times), rich in shifting timbres, with softly chiming guitar chords played off against scratches on the violin, breaths through the alto, etc. No new ground is broken and there are occasions when I'd have liked to hear a greater sense of space and emptiness, but these are relatively minor quibbles. 'edged timbre' is actually relatively user-friendly and could serve as a reasonable entryway into this general area of music. 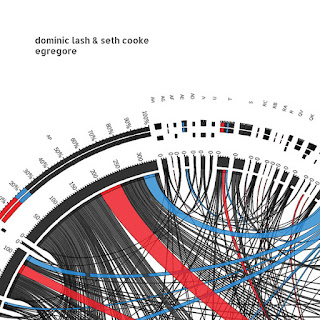 This one's a beaut. Lash (electronics) and Cooke (cymbals, microphones) have fashioned an endlessly absorbing slab of sound, apparently from two different dates (no idea if each recorded separately or both did each time) but melded together into a drone whose surface simplicity belies a wealth of complication at its core. There's perhaps an aura of Radigue in play here (Lash has worked with her), the general organ-y tone maintaining consistency on the one hand but fluctuating with great subtlety on the other; it's difficult to tell if those quaverings are intentional or the result of acoustic interference. These waves alter in fascinating ways, becoming fairly rapid but slightly irregular pushes, jostling underneath while the tone above begins to ripple. It sometimes sounds like a muted layering of a distant multitude of church organs being improvised upon in an insane manner. Toward the end of the piece, the tides lengthen, the air becomes more subdued, though still quite active. It shimmers quietly out of existence, having provided an hour of sublime music. Very highly recommended. 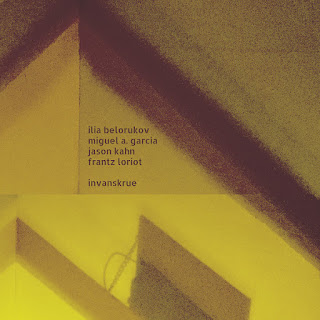 An improv date with four strong players: Belorukov (fluteophone, contact mics, effect pedals, ivcs3--software, I think--samples, field recordings), Garcia (laptop, electronics), Kahn (drums) and Loriot (viola). Interesting to hear after the Horst Quartet above. Not that there's any reason to think of similarities or differences, just two quartets improvising, this one to my ears hazier and more mysterious, less sharply focussed, yielding a more immersive experience. Two tracks, the first very much in this vein, rubbed and abraded surfaces nestled in amongst rounded crackles and sliding
hums. There's a very enjoyable sense of spatial volume here, with low, booming sounds getting lost in the room's corners; quite satisfying. The second cut, 'relieffestia', begins in more raucous territory, perhaps nodding to 'The Crypt', but settles down into a period of fine, giddy uncomfortableness--small, skittering sounds, chirping viola, soft fluteophone (?) sighs. No radio is listed but fragments of rockish guitar music surface discreetly now and then. The music simmers along, bubbling gently, strolling down unanticipated pathways, tinkling here, whooshing there. Good work on all counts. 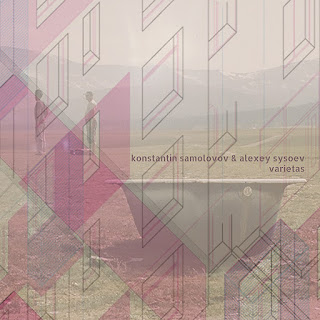 Interesting beginning: clear, clean drums along with somewhat similarly percolating electronics, very airy and floating. Samolovov wields the percussion (along with radio and voice recorder) whilst Sysoev mans the no-input mixer and utilizes various software. The clarity of drums as drums (no cymbals; sometimes he sounds like a reborn Barry Altschul) is refreshing once in a while, as is the jaunty, almost humorous aspect the music takes on in the first few minutes of 'moto', one of two tracks here. That transparency and sound-area continue throughout the piece, very active and engaging, the clatter and sputter of children at play. 'cycle' is more somber, the computerized clicks remaining more or less in the same territory (more bell-like tones), the percussion including some cymbals but also damped down a bit, less resonant, which is an effective approach. The interaction is quick and finely meshed, very much "of a piece", no overt give and take. An enjoyable release, light in a good way.