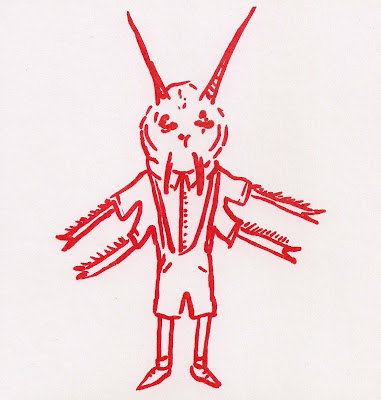 40+ minutes of sounds provided by Satoshi Kanda and Nick Hoffman, live in Japan in 2010. More than that is bafflingly tough to say. Searching for referents, one might hazard to place this material in the neck of the woods recently occupied by Taku Unami. That is, for one, there's a strong impression of missing something vital by virtue of merely digesting the audio portion of the event. When glass shatters early on, I conjure up a thrown bottle, but who knows? (Kanda is known for milk bottle utilization...) And much of the other sourcing is similarly elusive and disjunctive. I'm tempted to fall back on the old "liming space" trope; listened to with that in mind, it does so quite well; there's some depth at hand, enveloping the sparse bleats, moans, taps etc.

It's often very quiet, enhancing the feeling that I'm missing important portions, but so it goes. Aurally, its get to the level of listening to a quiet individual putter around his kitchen, not such a bad thing. FOr whatever reason, I found myself enjoying more often than not though I'd be hard pressed to say explicitly why. It breathes and feels honest, best I can do.

Essen Pest Control Ottawa is among one of the top companies in the pest extermination industry. With 20+ years of experience & trained technicians.

Godrej is offering pest control services for cockroaches in Gurgaon and Delhi. A Complete step-by-step process to eliminate Cockroaches.